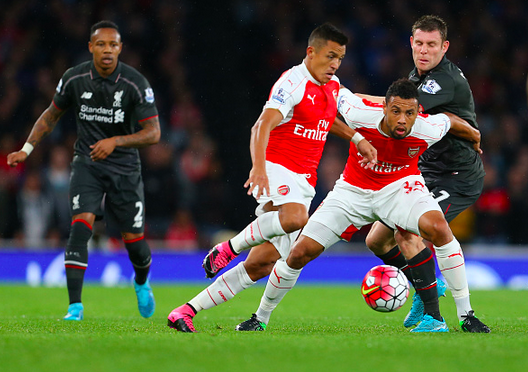 Arsenal manger Arsène Wenger has defended Francis Coquelin after Gary Neville criticised the player’s ‘lack or power’ on Sky Sports. Neville voiced the opinion that Francis Coquelin and Santi Cazorla were not good enough to anchor the Arsenal midfield.

Wenger was on the front foot:

I think we have had that debate for a long time now – ‘Arsenal does not buy defensive players’ – but Coquelin has the best defensive statistics and numbers in Europe. Defensively, Coquelin is doing a great job. Since January, we have conceded fewer goals than anybody else.

You know, in football you have to accept that anybody can be right. The only thing I want is that when people have opinions, it is documented and worked out before. Especially when it is football specialists.

Look, I am not against opinion, people can say they don’t think Arsenal is good enough, I accept that. But it is dangerous to say that ‘he will never be a player’, especially when the comment has come from people in football.

It is not just about talking. I accept you can be right and I can be wrong. But what you do not want is an opinion that comes out just because you feel like that. I watch sometimes, the guy doesn’t talk about the game, he tells you his life and what he thinks about football.

What is a concern is that it puts pressure on players, I believe that we are in a football job. With people who have been in the game, I love that they go on television, but what I would like is for them to help people to love football even more.

The first mission is to educate people. That is fantastic because the [ex-pros] can explain things that the guy who has not played at the top level can understand and to get people to really love the game.

That for me is the first mission. Some do it very well but the other way don’t like so much. I like to know that Schneiderlin [passes] to Carrick. Sometimes I watch games and at the end I don’t know the players who have played on the pitch because the guys don’t comment on the game any more.