Arsenal became the third English side to lose on Match Day One of the new Champions League season after a poor night in Zagreb, with Olivier Giroud seeing red in the first-half. 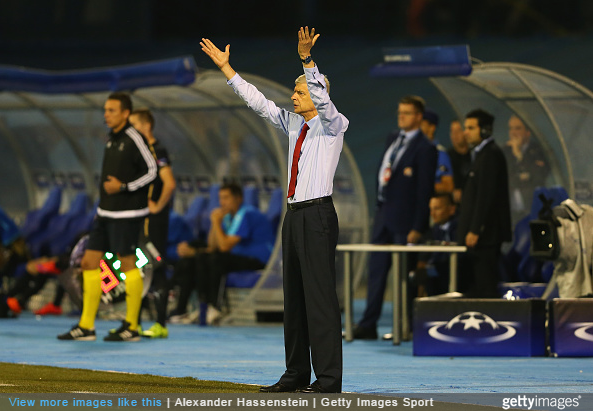 Arsene Wenger changed half his team for the clash, with his mind no doubt on the weekend’s Premier League clash with Chelsea. Ospina, Debuchy, Gibbs and Arteta all started as the Gunners looked to get an early three points on the board.

The visitors started brightly, with Giroud going close with a header before seeing a bundled effort hit the post, with the Frenchman failing to convert the rebound.

However, on 24 minutes the Gunners were caught cold by a fine counter-attack from the hosts, with Josip Pivaric’s shot saved by Ospina but then rebounding in off Alex Oxlade-Chamberlain.

Arsenal’s hopes of a win were further dented by the silly dismissal of Giroud. Booking firstly for dissent and then for a high challenge on Ivo Pinto, the Frenchman was arguably unlucky to see red, with the second challenge clumsy rather than malicious.

After the break, the Gunners looked better with just 10 men, with Mesut Ozil pushing forward and seeing one effort chalked off for a very tight offside decision.

However, just before the hour-mark, Zagreb went 2-0 up. Lax defending allowed Junior Fernandes an almost free-header from a corner, with Ospina beaten.

2-0 down, Wenger reverted to a back three, with Theo Walcott, Joel Campbell and Francis Coquelin (for the atrociously immobile Arteta) sent on.

On 78 minutes, the Gunners got themselves back into the game, with Walcott finishing superbly on the very same pitch where he netted a hat-trick for England in 2008.

Late on, Ospina made a superb last-ditch save to keep the score at 2-1 and ultimately the Gunners couldn’t find an equaliser.

While the north Londoners have plenty of time and plenty of games to make amends for the defeat, the poor showing by the likes of Arteta and the petulant Giroud once again highlighted the lack of world-class options down Arsenal’s spine.