Title-chasers Arsenal put their midweek League Cup flop against Sheffield Wednesday behind them and produced a superb second-half performance to grab all three points in a 3-0 win at the Liberty Stadium. 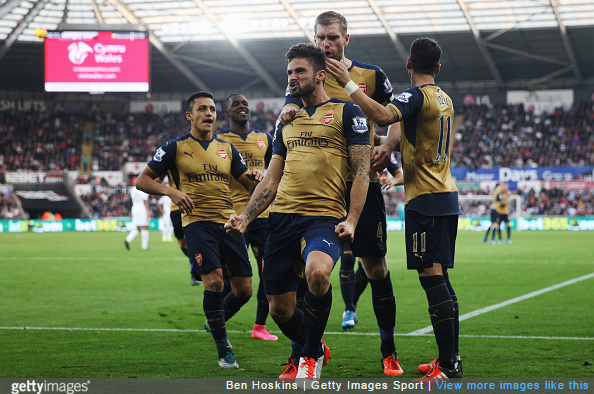 With the likes of Aaron Ramsey, Theo Walcott and Lex Oxlade-Chamberlain all on the treatment table, Arsene Wenger started with Joel Campbell on the right of the Gunners’ forward line, with the Costa Rican making his first-ever Premier League start.

The home side started well against an Arsenal team which struggled to click. Not for the first time, winger Jefferson Montero was a constant thorn in the side of the Gunners’ right-flank.

Bafetimbi Gomis, a man who scored in both clashes with Arsenal last season, had the best chance of the half, when put through on goal. However, the French striker dawdled on the ball, allowing the retreating Hector Bellerin to clear.

At the other end, Olivier Giroud had a great chance to put the visitors ahead, only to fire his first-time effort over the bar when he had time to take at least one more touch.

Not long after the break, Arsenal took the lead, with an unmarked Giroud heading home from a Mesut Ozil corner.

Garry Monk’s men continued to threaten the Arsenal goal, however, on 68 minutes the Gunners’ doubled their advantage. Former Arsenal man Lukasz Fabianski was at fault for the goal, with the Polish ‘keeper dropping a high ball under pressure from Laurent Koscielny and Giroud, with the former tapping in from close-range. While the Swans’ complained about the challenges on Fabianski, referee Kevin Friend was correct to let the goal stand.

The second goal proved to be a real kick in the teeth for the hosts, who started to struggle with the movement of Ozil, Campbell and Alexis Sanchez. And on 73 minutes, the third goal came, with Campbell netting his first Arsenal goal after yet another Ozil assist.

There was no way back for the hosts, while Wenger sent out youngster Alex Iwobi late on as the north Londoners secured a hard-fought but ultimately deserved victory.

Arsenal stay level on points with league leaders Manchester City, with the signs starting to point towards a serious title-tilt from the Gunners this season.