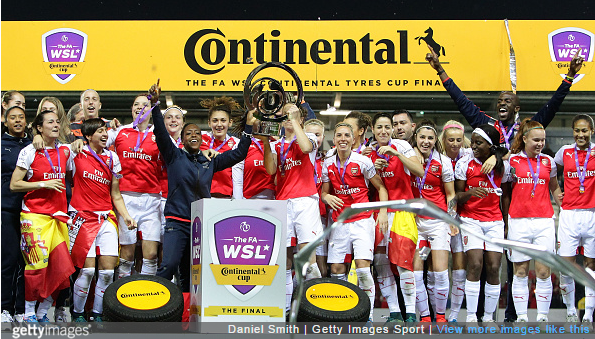 Notts County started well and went close a number of times in the first period, with Bassett, Jess Clarke and Rachel Williams all going close.

However, it was the Gunners, in their fifth Continental Cup final appearance in a row, who took the lead when midfielder Jordan Nobbs ran from just inside the halfway line before firing past Carly Telford at the near post. While it was a fine individual goal for Nobbs, England ‘keeper Telford should have done better.

“Magical moment!” @JordanNobbs8 scores tremendous solo goal to give @Arsenal the lead in the #ContiCupFinal. https://t.co/zyo7qlBajr

The Lady Magpies’ chances of cup glory suffered a further blow when Bassett was sent off, somewhat harshly, for a crunching tackle from behind on Arsenal’s Vicky Losada.

Controversial sending off for @laurabassett6. Was it a red card? Fav for Yes and RT for No. #ContiCupFinal https://t.co/lrjnfbsg26 — BT Sport Football (@btsportfootball) November 1, 2015

Nobbs, a player who has struggled with injury all year, then killed off the game with a powerful long-range drive. But once again, Telford arguably could have done better.

After the break, Notts County did their best to get back into the game but it would be Arsenal who would score the final goal of the game, with sub Chioma Ubogagu dribbling her way to into the County box before prodding past Telford.

The win for the north Londoners means they have now gone 11 seasons without picking up a trophy, although they’ll have to work cut out to challenge Chelsea and Manchester City in next year’s WSL. As for the Lady Magpies, they’ll rue that first-half red card. Indeed, after that infamous own-goal in the World Cup semi-final in the summer, Bassett has certainly had a memorable season, if not always for the most positive of reasons.

.@Arsenal run out 3-0 winners over @Official_NCLFC in #ContiCupFinal to lift a trophy for a 12th successive season! https://t.co/jTLs4BDPSJ — BT Sport Football (@btsportfootball) November 1, 2015