Oliver Giroud inspired Arsenal to produce one of their best-ever European performances in Greece on Wednesday night, beating Olympiakos 3-0 to bounce back from a dreadful start to the group stages and qualify for the last 16. 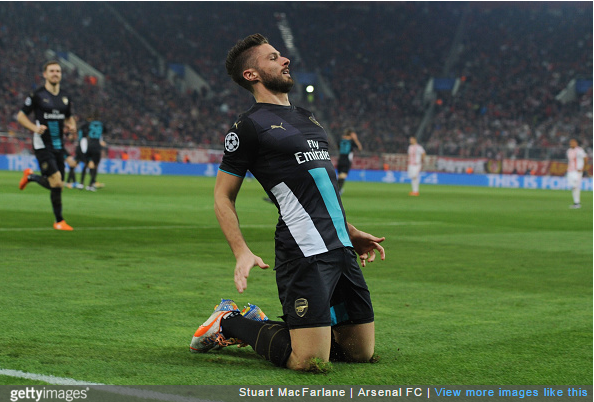 Needing to beat the Greek side by two clear goals (or 4-3) to book a place in the knockout stages, the Gunners started with Giroud flanked by Theo Walcott and Joel Campbell. However, it was the hosts who looked brighter early on. But the Gunners weathered the early storm and started to click into gear, with Mesut Ozil once again pulling the strings. Mathieu Flamini had already hit the frame of the goal when a sublime Ozil pass set up Aaron Ramsey, whose fine left-footed cross was headed home by Giroud.

Soon after the break, the visitors doubled their advantage, with Giroud firing home after superb work from the impressive Joel Campbell. With Laurent Koscielny a rock in defence, Arsenal looked solid throughout and when Omar Elabdellaoui handled Nacho Monreal’s effort in the Olympiakos boss, Giroud converted the resulting spot-kick to put the Gunners 3-0. That goal also sealed his first hat-trick for the north Londoners and left the Greeks needing three goals in the final 20 minutes to book their place in the last 16.

The game would end 3-0, with the Premier League side well worth their victory after a magnificent, mature display. After looking dead and buried time and time again in Group F, maybe Arsenal are destined for good run in the competition this season after all.