One good thing from Granit Xhaka’s horrendous shootout miss against Poland is that we’ll finally see an end to the painfully over-used ‘Xhaka can/can’t’ nonsense. However, the Swiss midfielder’s penalty miss is sure to haunt him well into his new career with Arsenal. 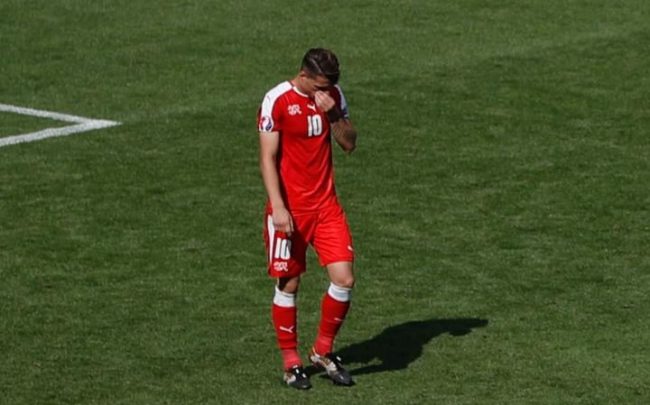 After 120 minutes of an entertaining draw, Switzerland’s Last 16 clash with Poland went down to penalties. Midfielder Granit Xhaka has been one of the most impressive players in the tournament so far.

However, with the shootout scores at 1-1, the 23-year-old walked up to take his spot-kick, before walloping it painfully wide of the Polish goal. High, wide and definitely not very handsome, the miss even moved the BBC’s resident sneer Mark Lawrenson to emit an out of character ‘OMG’…

In the words of Lawro… “OMG”

Both sides would score each of their remaining penalties, leaving the Poles to book their place in the quarter-finals, which is probably the right outcome overall.

As for Arsenal fans, they’ll be hoping Arsene Wenger splurges on a top-class striker before the start of next season as Xhaka may not chip in with any goals himself from midfield!