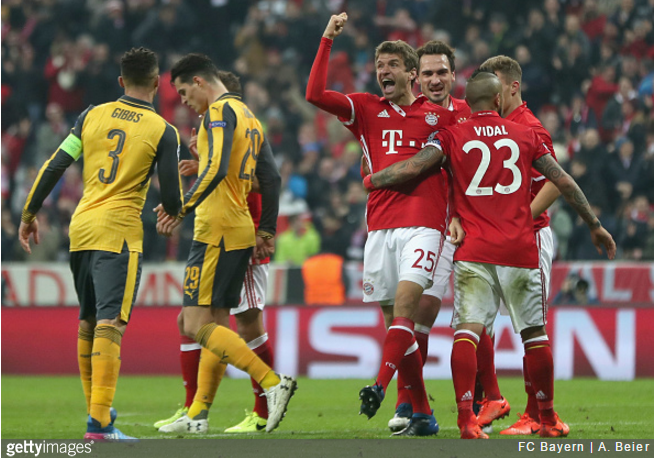 Bayern Munich enjoyed the freedom of the Allianz Arena as they well and truly eviscerated Arsenal in the first leg of their Champions League last-16 tie.

Indeed, the Gunners were monumentally outclassed in almost every regard as Bayern beat them in what quickly came to resemble the footballing equivalent of an elongated squash match.

Arjen Robben opened the scoring in the 11th minute, cutting in from the right and curling a smart shot past David Ospina from 18 yards – y’know, like every other goal he’s ever scored.

Of course, this all came as a surprise to Francis Coquelin, who seemed to be caught completely unawares by Robben’s reliance on his left foot.

In fairness, Arsenal did manage to draw level before limping in at half-time – Alexis Sanchez just about managing to clean up the mess he made of a soft penalty with a nimble follow-up…

However, the visiting side’s wafer-thin resolve completely disintegrated when they lost Laurent Koscielny to a hamstring injury just five minutes after the restart.

An already infuriating night for Arsenal fans was no doubt further exacerbated by the sight of Arsene Wenger, seemingly impassive, failing to the leave his seat (almost literally turning the other cheek) while his team took a merciless lashing before his very eyes.

Unsurprisingly, Wenger’s substitutions and tactical alterations made almost no effect on Bayern’s rhythm, who waltzed on unencumbered.

And so it was left to Thomas Muller, on for Lewandowski for the final stages, to once again ice the Bayern cake – the gawky forward thrashing in a fifth goal in the dying minutes after some characteristically shoddy passing among the Arsenal back line…

One hell of a win for Bayern; another absolute stinker for the Arse – and a crushing result that has once again sparked fervent backlash against Wenger and his crumbling, lily-livered empire.

The stats too were damning, with Arsenal’s headline acts falling silent… 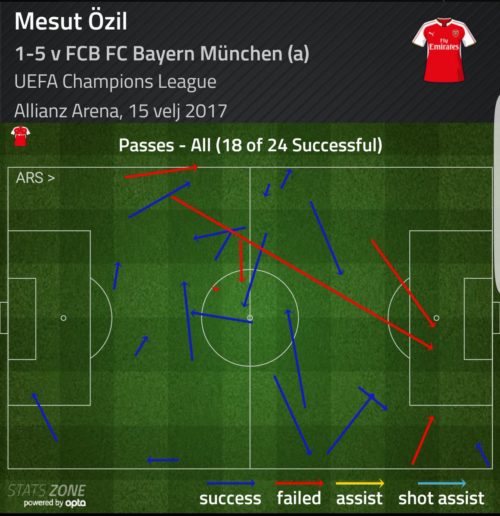 Completely overwhelmed from the off, Coquelin – Arsenal’s ‘defensive’ midfielder – failed to win a single tackle in the 77 minutes he was on the pitch.

That said, he did manage to attempt a massive eight passes in that time… 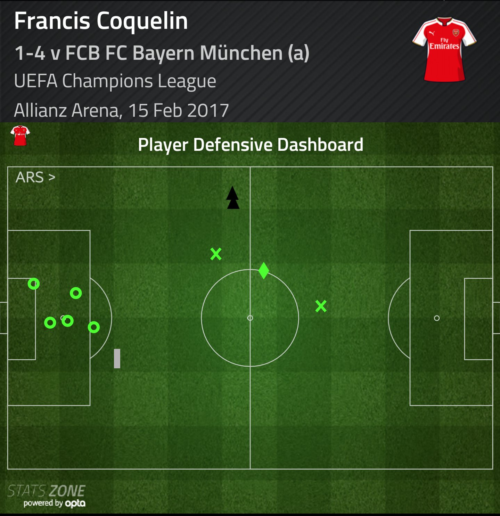 As if to encapsulate Wenger’s side’s intrinsic lack of spine, they committed just one foul between themselves in the second half.

Hardly indicative of a team going down fighting, now is it?

It looks like it’s finally starting to dawn that Arsenal are simply incapable of changing under their current manager.