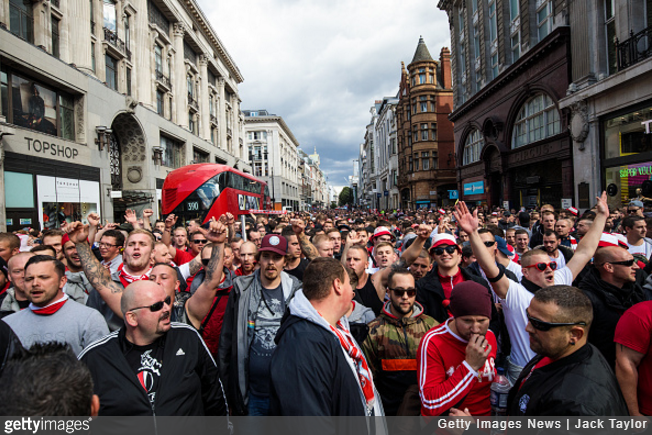 It would appear that Cologne are very much in the mood for tonight’s big Europa League opener against Arsenal, with some 20,000 travelling fans making the trip to the Emirates.

It was even reported in the local press that every single bank in the German city sold out of British currency due to the sheer number of supporters planning on attending the game.

That was indeed evident when several thoroughfares in central London ground to a halt on Thursday afternoon as a vast battalion of Cologne supporters marched down Oxford Street, chanting in unison and lighting red flares to complete the effect…

FC Koln have arrived & theyve brought 70% of any atmosphere the emirates will have tonight. pic.twitter.com/wlm9sG1XHg

Why, the spectacle was even grand enough to catch the cinematic eye of one Ken Loach…

We just had this coming down the street. Koln fans arriving for a trip to the Emirates Stadium. Long walk! pic.twitter.com/tUPHNTvx4r

Bewildering scenes, and yet not one report of loutish behaviour of any kind.

German away fans are usually pretty great in terms of atmosphere, though it would appear Cologne are still a cut above the rest of their countrymen.