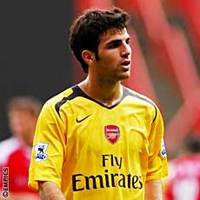 Arsenal fans will be delighted to learn that Cesc Fabregas has turned down a move to Real Madrid and pledged his future to Arsenal. The 20-year-old Spanish midfielder had been linked with a return to his native country for several weeks and the speculation wouldn’t go away. Fabregas revealed he has spoken to Real, but was persuaded to stay at Arsenal by Arsene Wenger.
Cesc said: ‘I spoke to Real’s president Ramon Calderon and sport director Predrag Mijatovic and they are spectacular people… It was very satisfying to listen to them as Real Madrid is a great club but I have decided to stay at Arsenal.’

Arseblog makes an interesting point when it writes: ‘So he [Fabregas] spoke to Real Madrid? Surely Arsenal didnâ€™t give permission for that. Most odd. Canâ€™t we kill Madrid, fatally, for that kind of thing?’
So Fabregas spoke to Madrid off the record, surely. Is that not tapping up? Or just another example of a super club doing what the hell it wants to unsettle settled players?