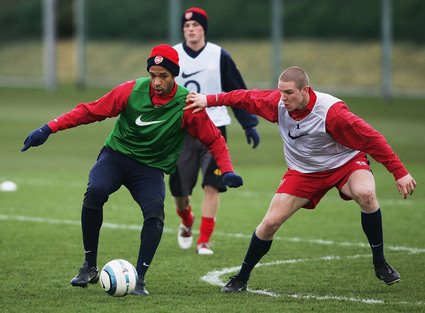 Three seasons ago Senderos was hailed as one of the best young central defenders in Europe. Many Arsenal fans believed he would be their new Tony Adams, only with less hair and more brains (he speaks six languages, roughly six more than Big Tony).
Fast forward to 2007 and Senderos’s career is, if not on the rocks, wobbling. He’s some way off being a first-choice centre-half at Arsenal and, crucially, he has developed a nasty habit of making Titus Bramble-like mistakes at least once in every game. Some experts say he’s not been the same player since he was given a royal going-over by Didier ‘The Bully’ Drogba against Chelsea at the Bridge last season. And he was dreadful last night against Sevilla â€“Â his mistake set up Sevilla for their first goal. Generally, he looked very low on confidence. I don’t deny that he’s very solid in the air, but he’s too slow for the modern game and has the turning circle of a small oil tanker.
Despite his menacing looks, Senderos is actually a sensitive, book-reading sort of chap, so maybe he’s just not cut out for playing in the incessant glare of the Premier League. What do you think? Is his time at Arsenal up? Is he the new Pascal Cygan? or should Arsene Wenger give him more time to recapture the form he showed a couple of seasons ago? So many questionsâ€¦