Arsenal striker Emmanuel Adebayor is the subject of an FA probe after allegedly headbutting team-mate Nicklas Bendtner during the Gunners 5-1 Carling Cup defeat to Tottenham on Tuesday night. Surprisingly Arsene Wenger – renowned for his astute observations of his players misdemeanors – said: “I did not know anything about it. I didn’t see it.”
The FA has appealed for footage from broadcasters to help its investigation. Sadly for the FA, Pies is not a broadcaster and would not fancy getting on the wrong side of Emmanuel Adebayor in any case, but we do have this picture of Jens Lehmann flicking Bendtner’s ear if the authorities want to investigate that. We are a bit concerned the young Dane might be getting bullied at the Emirates. 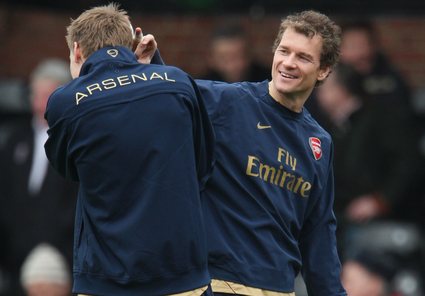