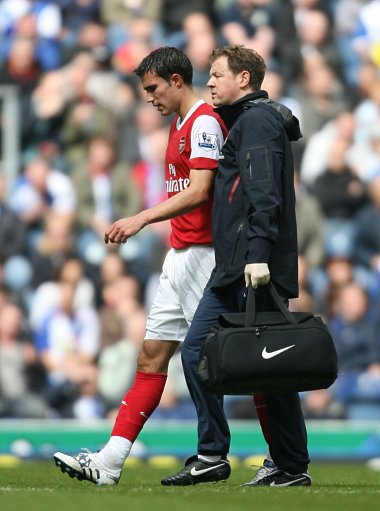 Arsenal manager Arsene Wenger has, in so many words, admitted that he has been left in a bewildered state of baffling perplexity by Holland coach Bert van Marwijk‘s decision to call up Robin Van Persie for their friendly with Turkey on November 17th, despite the striker having not yet returned to full training after injuring his ankle back in September.

Speaking after his side’s 2-1 Champions League defeat at the hands of Shakhtar Donetsk last night, Wenger masked his ire, saying:

“He’s not played with us or practised with the group, so I’m quite surprised he’s included.”

‘Quite surprised’ presumably being somewhat of an understatement.

Van Marjwick has also seen fit to include a host of other players who have recently been sidelined, including Liverpool’s Dirk Kuyt – who has only just recovered from the ‘serious ankle ligament injury’ he sustained whilst on international duty with the Oranje in mid-October.

Christ on a bike! Why are the Dutch suddenly so desperate for forwards?