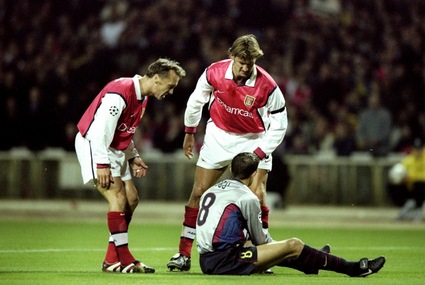 Arsenal need a hardman, an enforcer, a leader – they are a beautiful young team but they have no ugly side, unless you count petulance as ugly. Chelsea have John Terry, Man Utd have Rio Ferdinand (not to mention Gary Neville and others) – both men will gladly kick their own players up the arse when the chips are down. Arsenal don’t have a Terry/Ferdinand-type leader; there is no modern-day Tony Adams or Lee Dixon or Nigel Winterburn, or any ugly old defender in fact, to turn to when the going gets tough. And William Gallas is no Patrick Vieira.
Is that why the Gunners fell short this season? Does every successful team need an ugly player or two – even Brazil had Dunga, the least Brazilian player ever, when they won the 1994 World Cup.
If you were in Arsene Wenger’s shoes, which hardman would you attempt to sign? Or do you think Arsenal should continue to do things the beautiful way?