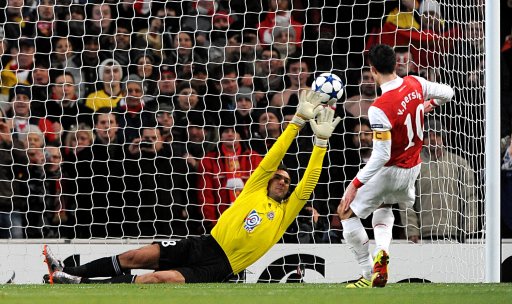 Spot on: Robin Van Persie puts Arsenal ahead against Partizan

For an eerie twenty minutes or so, a despondent hush fell over the Emirates stadium last night, when Arsenal – ahead through Robin Van Persie‘s ill-gotten first-half penalty (anyone else fear the worst when he lept to his knees in celebration?) – were suddenly pegged back by a roundly unadventurous Partizan Belgrade side, instantly rendering Champions League Group H open to the gods of mathematical analysis.

A 1-1 scoreline meant that the Gunners’ fate was no longer in their hands and that the result between Shakhtar Donetsk and Braga would be the deciding factor in their bid to advance to the last 16. A goal for Shakhtar and all would be rosy for Arsene Wenger‘s side, a goal for Braga and…well, I’m sure you get the picture.

Thankfully, Arsenal didn’t have too long to wait for their percolating concerns to be allayed, as a flurry of late(ish) goals from impact sub Theo Walcott (an instinctive, angled ponk) and the sporadically brilliant Samir Nasri (a cute shuffle and finish from the edge of the box) eventually saw them through – though it’s hard to argue that they didn’t make ridiculously hard work of finishing second in the group.

Speaking after the game, Wenger admitted that it all got a little bit hairy for Arsenal when Partizan unexpectedly restored parity just after half-time:

“I was never really nervous – worried, yes, because in football you can never say that you don’t worry when you are 1-1. We didn’t find our pace or openings in their defence.

“I felt our speed of passing was not incisive enough and it was a bit nervous as well. They were focused on closing us down everywhere. But I felt we had the resources to score and in the last 20 minutes they would drop a little bit physically.”

The draw for the last 16 of the tournament takes place in Nyon next Friday, and when quizzed on who he’d like to see his side pitted against, Wenger replied:

“Let’s be realistic, Barcelona are the super favourite at the moment, but we take what we get and if it is Barcelona, it is Barcelona. We have played them already last year and we will see.

“It depends whether you have your best players available, whether we have a good level of confidence then. It is very difficult to predict how far you can go.”

“If you don’t have belief you’d better stop playing football. We do believe. As a football fan, [I’d want] Barcelona or Madrid, but we will see.”

Given that centre-back pairing on the night Sebastien Squillaci and Laurent Koscielny were continually torn asunder by straight-forward throughballs sent into the channels for Partizan’s lone Brazilian forward Cleo to chase (good job he was a bit on the pap side really), I’d be keeping my fingers crossed for Schalke personally.