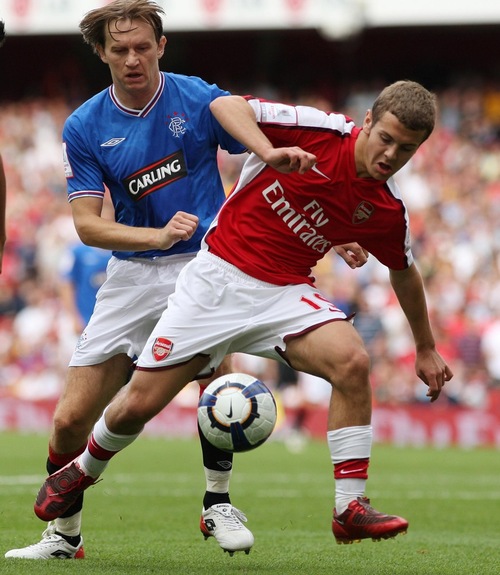 By all accounts, 17-year-old Jack Wilshere was a revelation for Arsenal in the Emirates Cup this weekend. So much so that many Gooners are now calling for the teenager to be fast-tracked into not only Arsenal’s first team, but England’s senior squad too. Yes, the hype machine has been activated.
A few quotes on Wilshere’s weekend:
“Jack Wilshere lit up the second half and this is a young man who has got so much potential it’s scary.”
Arseblog

“Many more performances like that from young Jack and we can expect the media to go into overdrive, especially as Fabio Capello was watching him today.”
Cannon Lore @ The Gunner
“Having seen Wilshere beef up over the summer, Wenger confirmed the boy is ready to start some games this term. ‘He is 17 years old, but has matured enough to compete already,” assessed Wenger. “He has more power to take people on.'”
Amy Lawrence in The Guardian
“Jack played wide right and immediately livened everything up with telling crosses, neat passes and some fine running with the ball. He is just such a natural, a nailed on England International before he’ll celebrate his twenty-first birthday, and he may even get some Premiership games for us this season coming at the ripe old age of 17.”
Arsenal World
“Wilshere was absolutely outstanding this weekend in the Emirates Cup – that chip, if it had gone in, would have been worthy of Ronaldinho in his prime. More beyond his years than Cesc ever was, and that’s saying something – incredible.”
Sulmaan Ahmad, Goal.com (Wilshere was Goal’s World Player of the Week)
Watch that chip here:

As usual, Arsene Wenger is one of the few people to keep a level head when all around are going hype-crazy. Arsenal’s gaffer added some much-needed balance to the Wilshere debate, saying:
“The only problem in England, knowing the impatience of English people, is that it will be difficult to keep the right pace in his [Wilshere’s] progress.
“Let’s be calm and quiet. There is still a year to go to the World Cup, and let’s see how he improves, how he is consistent.
“Let’s not make stars in just two games.”
So WIlshere is not ready to start every game for Arsenal this season, at least in the eyes of his manager, but there’s no doubt that he is one of the most talented young English players to have emerged in a long time -Â his poise and composure marks him out from so many young English midfielders, and of course we can thank Monsieur Wenger for that.
Do you think Jack’s ready for Arsenal’s first team?