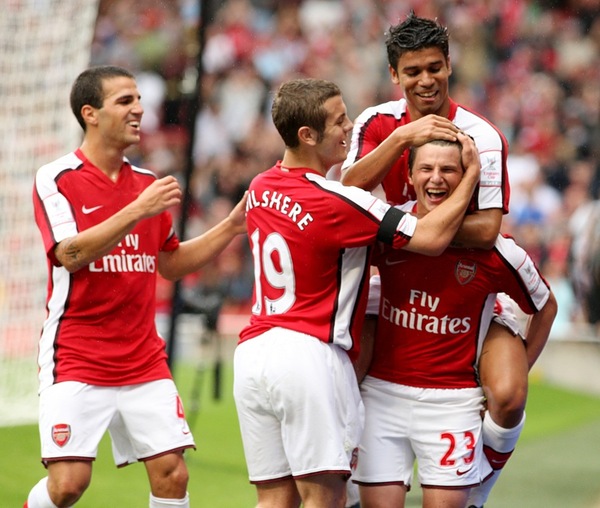 This is where you get to pick Arsenal’s best starting line-up for this season. First up, I’ll reveal my selection (based on Arsenal’s squad at time of writing). Obviously I’m aware that Arsene Wenger will use several different formations this season, for different scenarios, but this is the default team I would go with:
My XI (in a 4-3-3 formation):
Manuel Almunia
Bacary Sagna, William Gallas, Thomas Vermaelen, Gael Clichy
Denilson, Cesc Fabregas, Alex Song
Robin van Persie, Nicklas Bendtner, Andrey Arshavin
Almunia and the back four pick themselves but there are lots of permutations for the front six.

It seems to me that Cesc Fabregas, Andrey Arshavin and Robin van Persie must start. They are Arsenal’s three best creative players, no question. If all three can stay fit for the majority of the season, Arsenal might mount a more serious challenge than many people think.
With Denilson and Alex Song for support, Cesc can get forward – without worrying about a big, empty space behind him – and remember how to score goals. The further up the pitch he can operate, so much the better.
I prefer RvP as a second striker and so I’d pick Nicklas Bendtner – who is improving fast and, crucially, is blessed with the height and power that so many of his team-mates lack – as the target man. Arshavin is tricky because he doesn’t like playing out wide, so I’d give him and Van Persie a brief to roam and swap sides, feeding off Bendtner’s knockdowns and layoffs.
When you look at the talent left on the bench, you realise how difficult a job Arsene Wenger has. For example, there’s no room in my starting XI for Theo Walcott, Samir Nasri, Eduardo, Tomas Rosicky, Jack Wilshere, Aaron Ramsey and Carlos Vela. Phew.
Wilshere, Vela and Ramsey are not quite ready to become first-team regulars (in Wenger’s mind, anyway), while Eduardo and Walcott may make more of an impact coming off the bench. Nasri and Rosicky won’t be fit for the start of the season, and anyway I’m not sure I’d have either in my starting XI. Close but no cigar.
This was a very tough XI to come up with and I’m sure that there will be plenty of lively banter among Arsenal-supporting Pies readers. After all, no one loves a mass debate more than your average Gooner.
Anyway, that’s how I see it. By the time you get to leave a comment, perhaps Brede Hangeland will be alongside Billy Gallas?
Let’s hear your XIs…
MORE
What is Tottenham’s best starting XI for the 09/10 season?