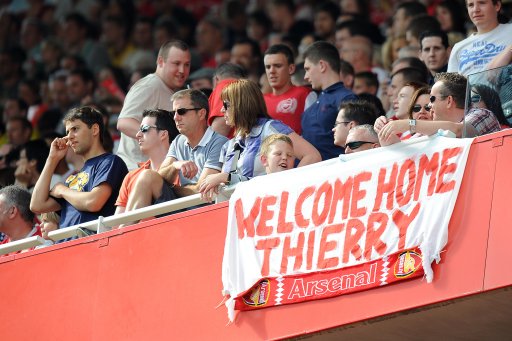 If there’s one player out there who has Arsenal DNA, then it’s former Highbury idol Thierry Henry. The French superstar has remained a massive fan of the Gunners since leaving north London for Barcelona in 2007.

Currently with the New York Red Bulls, the record-breaking former Gunner is now training with Arsenal in the MLS off-season. However, in a move that will disappoint those most sentimental of Gooners, manager Arsene Wenger has stated that he has no intention of re-signing his former golden boy on a short-term loan.

“I have not thought about that at all. At the moment we have a big squad and anyway, that problem cannot examined before the end of December.

“At the moment we have 26 outfield players so we have a massive squad. “Thierry’s future is in the States. He is going back in February. Until then we will just help him to practise and keep fit.”

“Thierry loves football, and he loves Arsenal. To practise with us for him is a pleasure – for him and for us. I think it is an honour and a pleasure.

“An honour because he is a legend at the club and he is coming back, a pleasure because when he is on the football pitch, he is still a great player.”

Still, with Marouane Chamakh failing to impress and Park Chu-Young still coming to terms with English football, having Henry on the bench would surely be a decent option. He may not be as quick as he once was, but playing behind Robin van Persie, the Frenchman could still light up the Premier League for a couple of months.

Click here to see photos of the striker back training with Arsenal.

While here’s a video to remind us all of just how fantastic Henry was at Arsenal, featuring every single one of his 226 goals for Arsenal. It’s 14 minutes long but worth watching all the way through!