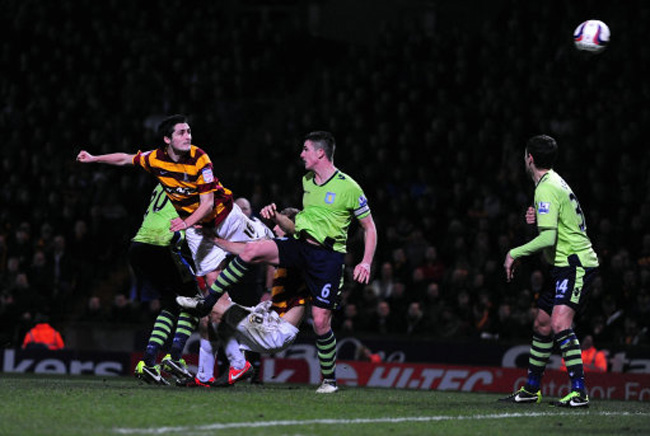 After dumping the mighty Arsenal out of the Capital One Cup in the last round, League Two Bradford are on their way to doing the same to the (bit less) mighty Aston Villa after winning 3-1 at home in the semi-final first leg.

Fleet-footed forward Nahki Wells opened the scoring for the Bantams on 19 minutes as the home side but only after ‘keeper Matt Duke had made a couple of superb saves. Indeed, the Bantams’ glovesman was superb throughout.

Carrying a strong aerial threat, Bradford doubled their advantage on 77 minutes through Rory McArdle’s header. but just five minutes later, Andreas Weimann got a goal back for the Premier League side to set up an exciting finale.

However, it was the League Two side who would score again before the end, again courtesy of a header, this time from Carl McHugh.

Can the Bantams really become the first fourth-tier side to make it to a League Cup final since 1962 (Rochdale) or will Paul Lambert’s sorry Villans rouse themselves ahead of the return leg?  (I don’t bloody know).