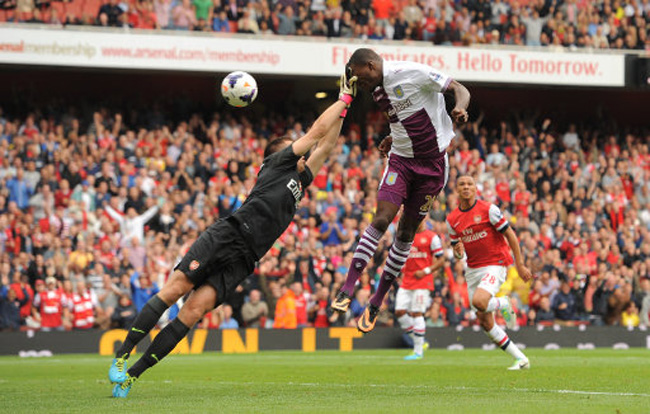 Add an inept referee to a summer of mismanagement and what you get is a disastrous start to the new season for Arsenal.

The Gunners started the game well and opened the scoring courtesy of a fine move which was finished off by Olivier Giroud. However, the home side failed to build on that lead with Villa’s frontline always looking a threat. And then, just before half-time, Gabriel Agbonlahor strolled through the Arsenal backline before being upended by Wojciech Szczesny, who received only a yellow for his troubles. Arsenal then lost Kieran Gibbs to a head injury to make matters worse.

Christian Benteke netted at the second time of asking from the resulting spot-kick and the big Belgian netted again from the penalty spot, this time on the hour-mark and only after a dreadful decision by Anthony Taylor, who wrongly adjudged Laurent Koscielny to have fouled Agbonlahor in the box. The unlucky Frenchman was then sent off after a second bookable offence as the wheels well and truly came off for the Gunners.

With a threadbare squad, Wenger had little options to re-energise his 10 men and ultimately the Villans would score again when defender Antonio Luna scored after a counter-attack.

“Spend some f**king money”, sang the Arsenal fans as another season of discontent looks set for the north Londoners. As for Paul Lambert, the Villa boss will not only be delighted with the result but with the all-action, sharp display of his young side.