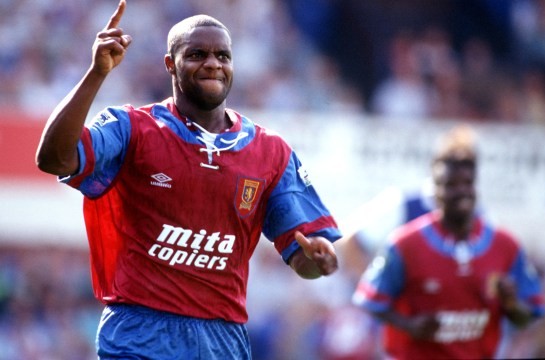 Lace-up shirt collars, eh? By ‘eck, them were the days

Exactly 22 years ago to this very day on October 3rd 1992, Aston Villa striker Dalian Atkinson scored the goal that would come to define his career in the inaugural year of the Premier League – no bad thing, as it happens.

Having wrestled control of the ball deep inside his own half, Atkinson embarked on a twisting, squid-like dribble that took him past four stout tackles before sending a delicate chip over outstretched Dons ‘keeper Hans Segers.

It was Maradona-esque and, we think we’re right in saying, almost definitely the best goal ever scored by a bloke from Telford…

Brilliant in the truest sense of the word – it’s only a shame Atkinson didn’t do that kind of thing more often.

Fondly remembered by Villa fans as an integral component of the “Heroes of 94” Coca Cola Cup-winning side, Atkinsons’ post-Villa career proving to be a bit of a damp squib – with the striker slowly petering out after leaving Villa Park for Fenerbahce in 1995.