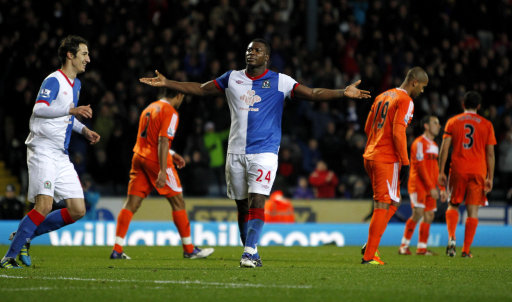 At Ewood Park on Saturday, Blackburn fed the Yak ’til he almost burst, but he indeed score a goal, four to be exact. The 29-year-old (that’s what he claims anyway, but I’ve a sneaking suspicion that ‘Nigerian years’ are closer to ‘dog years’ than anything else) has rediscovered his best goal-poaching form again, leading Rovers to a much needed three points against Swansea.

The former Pompey striker’s goal came courtesy of a brace in each half, while Leroy Lita and Luke Moore netted for the Swans. Brendan Rodgers’ side wasn’t helped by the dismissal of midfielder Joe Allen on 80 minutes, but while the Welsdh side looked good going forward, their poor defensive display will leave their manager with much to ponder.

Despite the 4-2 win, which leaves Rovers just a point away from 17th place, a section of the Ewood fans still stayed after the game to hold another ‘Kean-out’ protest, which seemed a little harsh, to be fair.