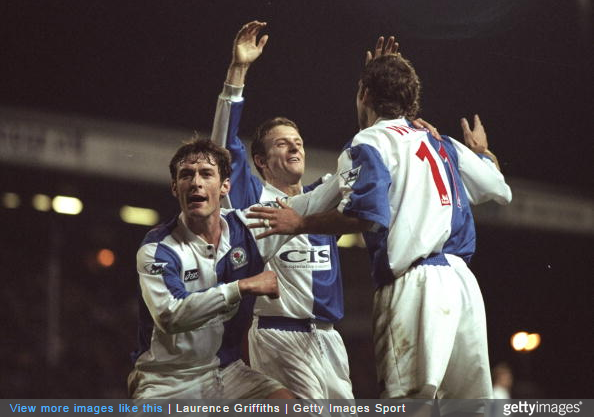 Under Roy Hodgson’s guidance, Blackburn Rovers were attempting to regain the heights that had seen them take the Premier League title in 1994/95.

That success had been followed by a season of abject disappointment after reigning champions Rovers first flogged their main goal threat, Alan Shearer, for a world-record £15million fee and then proceeded to wash up in 13th place in the 1996/97 campaign.

However, this early 1997/98 season thumping of Sheffield Wednesday at Ewood Park got hearts thumping in Lancashire once again.

After just seven minutes, Rovers found themselves 2-0 up thanks to a Kevin Gallacher brace. Benito Carbone replied instantly for the Owls, only for teammate Graham Hyde to put the ball into his own net to make it 3-1 with just 10 minutes on the clock.

Carbone then netted again shortly after the restart to stir faint hopes of a remarkable Wednesday comeback before the Italian went and got himself sent-off on the hour mark to remove all doubt.

Lars Bohinen and Sutton then added two more as Rovers ran out convincing 7-2 winners on the night.

Sutton went on to score 18 goals that season, sharing the Golden Boot with Dion Dublin and Michael Owen.

Blackburn finished sixth and qualified for Europe, while Wednesday avoided relegation by four points, finishing 16th in the pile.