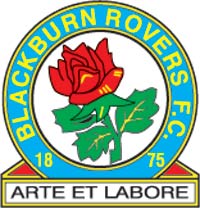 Looking forward to the new season? Who isn’t?! Well, in the name of looking forward let’s carry on from where we left off (a look at Aston Villa’s season,) and look to the North with Blackburn Rovers. Dreams of an FA Cup final against Burnley and tales of born again Christians abound.
Introduce yer’sen…
Dan Clough. Blackburn Rovers. blackburn.theoffside.com
How do you think you’ll do next season?
McCarthy, Santa Cruz, Jason Roberts and Maceo Rigters will all score 20 goals each. We’ll push United and Chelsea all the way but not quite win the title. We’ll win the FA Cup (beating Burnley scum 7-0 in the final) and the UEFA Cup. I know… I’ve always been a bit of a pessimist!

How has your summer been?
Sparky’s been very shrewd. Rigters for half a million is a good buy and bringing in a new keeper means we can get rid of Enckleman! Santa Cruz is an exciting prospect. Got rid of Gray and Todd who were both past it.
Who do you think will make the biggest mark in the squad?
All eyes will be on Santa Cruz but Derbyshire will be pushing for an England call up by Christmas.
Who owes you a decent season?
David Dunn. Needs to prove it was worth bringing him back. If Mokoena does nothing we need to get rid of him as well he’s bloody useless!
Which youngster should we all watch out for next season?

Derbyshire is already known about. Sergio Peter will hopefully get a few more games – he’s a handy left winger but doesn’t get much action with Pedersen playing well. Joel Garner is also a good striker who was on loan at Carlisle last season, he’ll probably make a name for himself on loan somewhere else this time.
Who do you think will finish in the top 4?
1. Man Yoo
2. Chelski
3. Liverpool
4. Arsenal
Who is going down?
18. Bolton Bastards
19. Fulham
20. Derby
Finally, make a random prediction about next season.
Rovers to win the Fair Play Award after Robbie Savage becomes a born-again Christian.