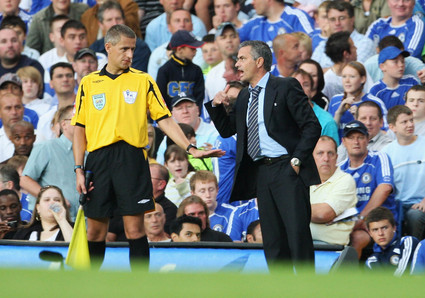 Against Blackburn at the weekend, Chelsea forward Salomon Kalou had a perfectly fair goal disallowed by a linesman (Peter Kirkup) who didn’t realise you can’t be offside if you are behind the ball. Rovers boss Mark Hughes apparently doesn’t understand the law either, because he also seemed to think that Kalou was in an illegal position: ‘The goal was offside. He was only about half a yard or so, but he was offside,’ Sparky said. ‘From our point of view we are happy that it was offside.’ Well, sorry to disappoint you Hughesy, but Kalou was onside. It’s slightly concerning that a Premier League manager appears to not know one of the most important rules of the game.
The dodgy decision not only cost Chelsea two precious home points (probably), but sent Jose Mourinho into a predictable rage: ‘I can’t understand it. If the linesman wants to explain, then maybe it would be a good thing,’ he said. ‘I told the linesman I would be waiting for his phone call to apologise.’ Wait on, Joseâ€¦
More Chelsea stuff over at Chelsea Pies