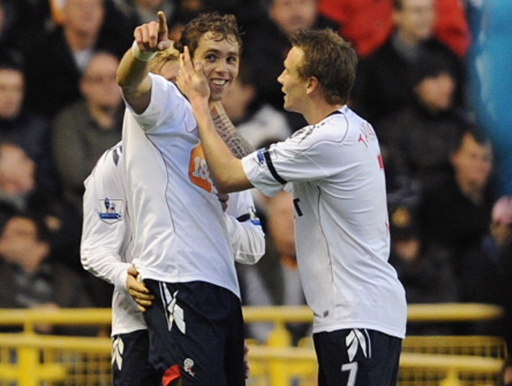 There wasn’t an awful lot that could be considered ‘pretty’ about Johan Elmander during his three years at Bolton, with the Swedish target man earning his crust as a (perfectly effective) defender-muscling nuisance and a (slightly less effective) point-and-shoot finisher who seemed to do most of his best work away from the Reebok Stadium in gritty, close away encounters.

He did, however, have his moments – his superb, virtuoso goal against Wolves (Bolton’s second goal in a gritty, close 2-3 win away at Molineux in November 2010) most definitely being one.

Indeed, so fine was the goal in question that it was subsequently voted the Greatest Premier League Goal Ever Scored by a fair old margin in a Guardian poll just over a year later, which admittedly seems a little overblown in retrospect.

That said, while the standard of opposition and grandeur of the occasion are debatable, Elmander’s solo special certainly takes some beating in terms of aesthetics and technique…

That turn. Positively indecent. It’s almost as if Elmander momentarily vaporises into a cloud of ice cold Swedish coastal mist to navigate his way through that clump of defenders – and then the finish isn’t half bad either!

Indeed, the weekend of the 13-14th November 2010 proved to be a good couple of days for slaloming wonder goals, with Nedum Onuoha scoring his magnum opus in Sunderland’s shock 3-0 tanking of Chelsea the following day…