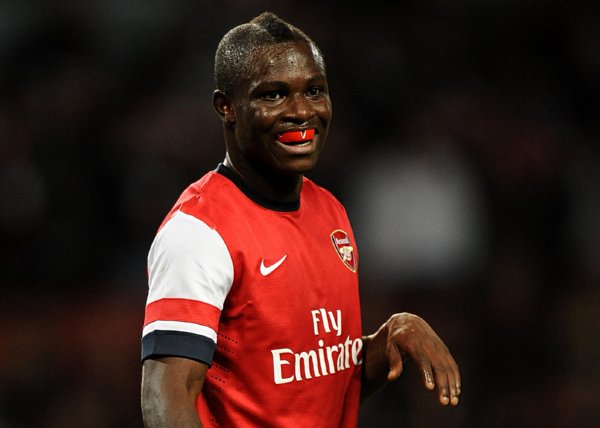 Frimpong: Not the sharpest sandwich at the picnic

Emmanuel Frimpong has deleted a Tweet he sent out last night in which he sort of appeared to hint that he’d get more chances in the Arsenal first-team if he were “white and English”.

Ahead of Tuesday night’s League Cup game against Chelsea, one of Frimpong’s Twitter followers asked him why he wasn’t in the side for the game, to which the 21-year-old Ghanaian midfielder replied: “LOL I wanna laugh,” before adding: “Sometimes I wish I was white and English #realtalk”.

This, inevitably, sparked a low-level “race row” in the national press this morning, with many papers reporting that Frimpong’s “outburst” had accused Arsene Wenger of racism – this, of course, being the same Arsene Wenger who has fielded literally hundreds of non-white, non-English players during his time at Arsenal.

Frimpong then moved to clarify his position, Tweeting:

“Not every tweet is football related. Goosh [sic – literally no idea what that means!]. Look what ever [sic] you read tomorrow has majorly been twisted.

“Is a joke what people will do to start controversy goodnight people.”

Arsenal have already confirmed that they won’t be punishing Frimpong for his remark, but it is understood that the club have issued him with a “gentle reminder” over his use of social media, given that he has already been fined £6,000 by the FA in the recent past for referring to a Tottenham fan as “scum Yid” on Twitter last year.

As for the League Cup; could it be, and just allow our minds to wander here folks, that Wenger hasn’t picked Frimpong to play against Chelsea because he….shock, horror…isn’t actually that good?