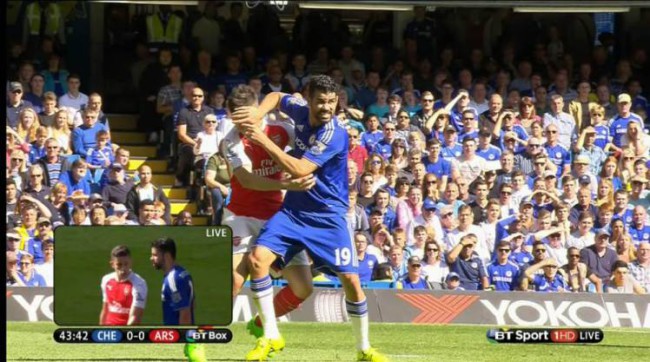 Ridiculed for its absurd report on a 0-3 defeat at Manchester City, the Chelsea website authors have once again been writing with their blinkers on.

Chelsea striker Diego Costa should have been sent off before Arsenal lost Gabriel for reacting to the Spaniard’s goading when the sides met in the Premier League today.

Every publication bar one says Diego Costa should have been sent off by referee Mike Dean. Before we see what the Chelsea website says, let’s look at a range of those other views:

The most squalid part of the little exchange that ended Gabriel’s involvement is that we know enough about Costa’s skulduggery to say for sure that he will probably reflect on what happened as good play. Costa spends so long trying to pick arguments with opponents his credo seems to be that eventually someone will take the bait. More fool Gabriel that he was the one. Yet there is not a great deal to admire about Costa’s behaviour when he resorts to these levels of snideness and, unless Mourinho can tell us otherwise, there seems to be absolutely no desire within the club for him to change.

A match which pivoted on Diego Costa’s gamesmanship…

This barely tells the story of a game that will leave Arsenal manager Arsene Wenger furious and frustrated in equal measure as he saw his players fall victim to the trademark and predictable wind-up tactics of Chelsea striker Diego Costa. Arsenal defender Gabriel was sent off seconds before half-time for kicking out at Costa. It came at the end of a lengthy spat after the striker had shoved his hand into the face of Laurent Koscielny three times…

Arsenal’s reduced numbers made their task almost impossible and altered the face of the game.

It was all Costa’s doing – and one suspects that, privately, he will be very pleased with himself for that. It began with the Chelsea forward grappling with Koscielny, catching him in the face with a flailing arm. Costa then fell to the ground theatrically, got up and shoved his chest into Koscielny, who also took a tumble. Gabriel got involved, giving Costa a shove, at which point tensions flared between the pair.

Let’s be clear. Costa was horrible here: sandpaper made flesh, a blue-shirted jab in the eye and above all lucky not to be sent off himself. It is often said certain players they could start an argument in an empty room. Costa could start an argument alone on a deep space asteroid somewhere past Betelgeuse. He niggled, he provoked, he stopped the flow of the game, he deliberately and skilfully got an opponent sent off.

The game was tailor-made for Diego Costa, who was in his element as he baited, goaded, dived, slapped, bitched and whined his merry way through the match – the Chelsea fans gleefully serenading his efforts as he reeled through his entire risible repertoire.

As part of the act, Costa was shown a yellow by referee Mike Dean for clambering all over Laurent Koscielny, with the loathsome striker managing to get away with a couple of half-arsed slaps into the bargain…

After an equal and at times enterprising first half, the Gunners were reduced to 10 men when Gabriel clashed with Diego Costa in the centre circle just before the half-time whistle. The Chelsea forward should himself have been sent off moments before after catching Laurent Koscielny with a forearm to the face as the pair wrestled inside the Arsenal penalty area.

Gabriel and Diego Costa were involved in a dispute and came together as they remonstrated with each other. With players from both sides separating the pair, and both men receiving yellow cards, the incident appeared to have been diffused, but the Arsenal defender refused to accept what had gone on and then flicked out at Diego Costa, leaving Mike Dean with no option but to send him off.

Mentions of Cost elbowing and slapping Koscielny: none.