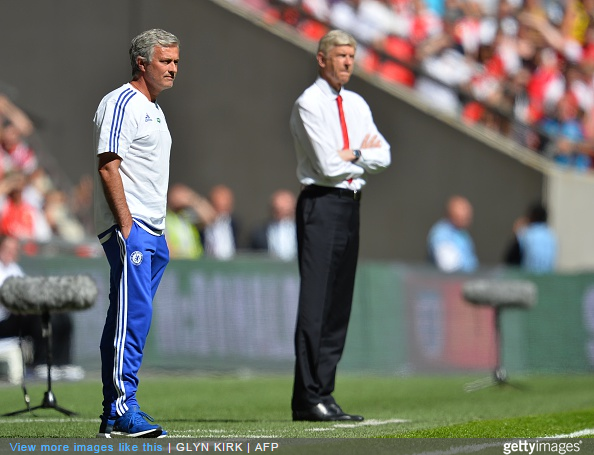 Jose Mourinho has used his Friday press conference to aim yet another boring, petty and thinly-veiled barb in Arsene Wenger’s direction.

In other news, the Atlantic Ocean is still registering on the damper end of the wet scale.

Any road up, Mourinho declared to his fawning audience that there is only one manager in the Premier League who is free to moan about referees, underachieve and lose games willy-nilly without fearing for his job – and it ain’t him.

When asked to comment on Diego Costa’s recent dismissal against the Gunners, Mourinho replied coyly:

If I answer I’m going to be suspended. I don’t want to touch the theme and everything that surrounds this situation because I want to be on the bench.

I don’t comment and I tell you why: some managers can speak about the referee before the game and after the game and some others cannot.

He was then asked about the pressure mounting on Newcastle coach Steve McClaren after the club’s dismal start to the season, to which he responded:

We cannot lose matches, we cannot be below expectations. There is one that for some reason is outside that list. Good for him.

Asked to clarify who he was talking about, the Portuguese grumbled on:

You know. The one who can speak about the referees before the game, after the game, can push people in the technical area, can moan, can cry in the morning in the afternoon, nothing happens.

He can not achieve, keep his job, still be the king. I say just one.

When repeatedly asked to name names, the Chelsea boss simply muttered: “Just one out of 20.”

We can only assume he’s jealous of Wenger’s job security or something.

Still, this is a grown man we’re supposedly talking about here.