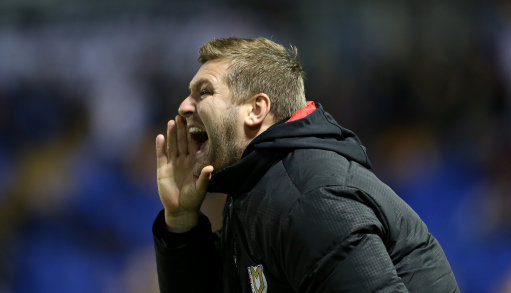 “Oi! Alex! Take that fackin’ polo shirt off you numpty!”

To put it in youth-friendly parlance, ‘it’s complicated‘ between MK Dons and AFC Wimbledon at the moment, with the two sides – one borne from the other in acrimonious circumstances – due to meet for the first time since the separation in the FA Cup on Sunday.

As is standard procedure, the two clubs have been boning up on one another ahead of the game to try and glean that priceless bit of insider knowledge, though MK Dons manager Karl Robinson has revealed that his scouts were instructed by his higher-ups to watch AFC games incognito for fear of being sniffed out, tarred, feathered and ran out of town.

AFC Wimbledon officials apparently told Robinson to stay away from their Kingsmeadow stadium entirely and also advised MK Dons that scouts should not be sent either for fear of vicious reprisal and, if the League One side should insist on sending men out to watch AFC, that they not display any club insignia on their clothes.

“[AFC Wimbledon] asked us not to go, and that’s what we’ve got to respect. They played at Morecambe last weekend and our scout Alex Rae went up there without causing any hassle.

“We’ve watched DVDs and everything else and tried to do our job. We’re a professional football club and we want to rise above any negativity. I’m sure AFC Wimbledon would want to do the same.”

He then went on the charm offensive, really endearing himself to the AFC faithful once again by failing to stop talking:

“So without MK Dons, with all due respect the original Wimbledon would have disappeared completely but sometimes I don’t understand the negativity surrounding the game. I just want to win a football match and you can’t hold a son responsible for his father’s actions.

“We’re a well-run, family-friendly football club with a wonderful arena and I don’t think the players, management and staff here should be judged on the past whatsoever because we’re only doing our jobs.”

Good luck on Sunday Karl. Just remember, pretty much every single football fan in the entire country wants you to get well and truly pounded.