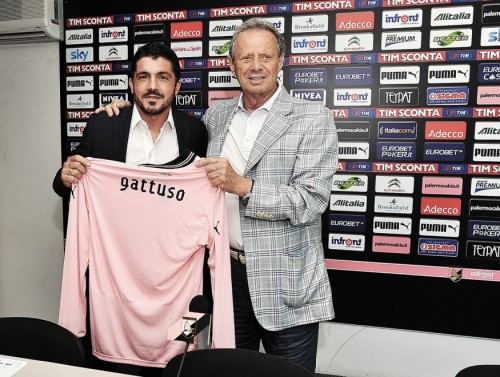 After a mediocre start to life in Serie B, rumours that Gennaro Gattuso had been sacked by Palermo circulated yesterday but they were duly quashed by the club’s tyrannical owner Maurizio Zamparini, who told reporters that he had not come to a decision yet and that he was planning to “sleep on it”.

Well, it would seem that Zamparini had a rotten old night’s kip as, sure enough, this morning he has issued Gattuso with his P45 just three months after hiring him – which, in all fairness, is a fairly lengthy innings when it comes to the managerial role at the Stadio Renzo Barbera. Indeed, Gian Piero Gasperini was hired and fired TWICE in the space of 19 days not so very long ago!

Palermo have since hired Beppe Iachini as Rino’s replacement, who duly becomes the 28th head coach to have been employed during Zamparini’s 12 years at the club. Coincidentally, Gattusso is – by our count – the 42nd managar that Zamparini has fired since moving into football club ownership with Venezia in 1987.

May the fun and frolics never end!