Currently lining out for Tampine Rovers in Singapore, winger Jermaine Pennant added to the sea of Brexit opinion on Twitter on Friday morning, albeit by pondering a rather misplaced question. 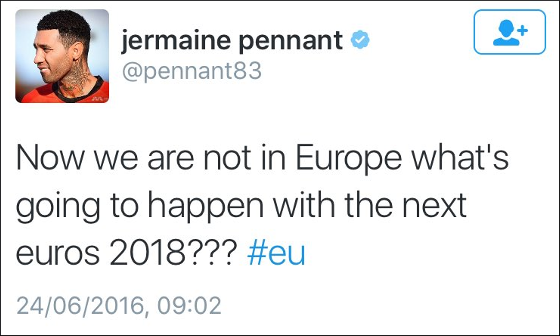 Not grasping the fact that a team doesn’t have to be in the EU to be in UEFA, the former Arsenal, Liverpool and Stoke attacker found himself on the end of much Twitter mockery after the Tweet and duly deleted it. However, Pennant then claimed (somewhat unconvincingly) that it was all a joke..

Of course England will still have to qualify for EURO 2020 (not 2018), so the Three Lions may not be there after all!