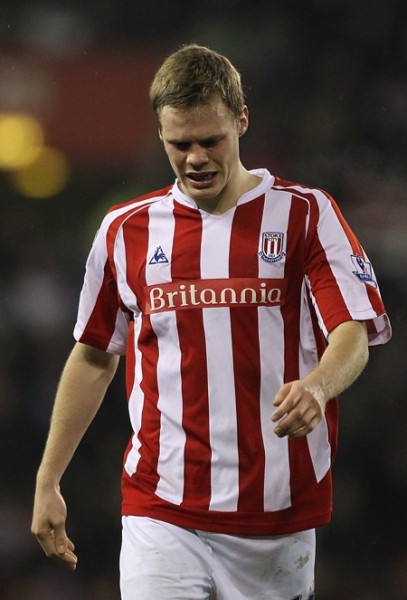 Not that sort of player

FOOTBALL is increasingly starting to resemble a popularity contest. We know who we like, we know who we tolerate, and we know who we hate. That’s just the society we live in these days. Some people are simply meant to play the good guy while others, like Craig Bellamy, are meant to be the villain of the piece. Life’s just easier for us to understand that way, which means Bellamy’s script-straying charity work in Sierra Leone blurs the lines. Are we still meant to jeer him for his unfathomably irritating body of work on the pitch, or cheer him for his altruistic and ultimately more important efforts away from the day job? Maybe just boo, because now the evil genius has got us more confused than the plot in Sherlock.

This ideal was fulfilled with more assurance during the World Cup. ITV’s indignant frothing at Uruguay following Luis Suarez’s selfless handball against Ghana might have inadvertently earned the South Americans the bastard’s vote, but at least we had been given a team to root against. Holland, too, were cast as thugs, which they admittedly were, even if you grudgingly came to admire the utter shamelessness of Mark van Bommel. Strangely though, every shuddering foul by Van Bommel was greeted with far more vitriol than any of Paul Scholes’s specials for Manchester United are afforded. Odd, that. 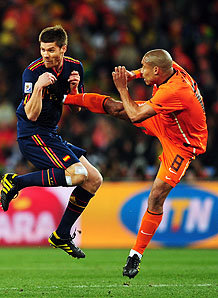 When the Dutch faced Spain in the final and Nigel de Jong produced that karate kick on Xabi Alonso, we knew who we were meant to support, even if the Spanish were more than capable of getting stuck in too. Carles Puyol, in particular, put in a few crunching tackles but Spain are not remembered for any sort of dirty tactics. Not that sort of team, you see.

The debate over whether or not someone is “that sort of player”, a cod excuse used to defend a player sent off for a bad tackle, resurfaced following the opening Premier League weekend, when Liverpool’s Joe Cole endured the worst debut since the infamous words, “Welcome to the first episode of James Corden’s World Cup Live!” Cole, of course, was shown a red card for scything down Arsenal’s Laurent Koscielny 45 minutes into his first Premier League game for Liverpool and while the Sky pundits, Jamie Redknapp and Paul Merson, admitted that Cole deserved to go, they also insisted that, yes, he’s not that sort of player.

While the utterance feels instinctively hackneyed and clichéd, an almost meaningless defence mechanism, it somehow still manages to ring true. When it comes to certain footballers, it really is impossible to see them as that type of player and Cole – tricksy, loveable and forever young – doesn’t fit the role of the bad guy. Everyone likes Cole; even Arsene Wenger, usually so quick to hit out when his Arsenal players when his Arsenal players have been injured in the past, refused to criticise him, despite the fact that Koscielny, who did play on, was lucky to escape serious injury. The situation is further exacerbated when we consider that players such as Cole are usually more likely to be on the end of a reducer from time to time – indeed when he was a youngster at West Ham, he suffered two serious ankle injuries in the space of six months, after being fouled by Derby’s Rory Delap and Newcastle’s Lomana Lua Lua.

Cole doesn’t have a record of nasty tackles either, although in the era of YouTube it would not be difficult to find evidence of one in the past. Yet to peddle that view is arguably missing the point. Cole might not have been that sort of player in the past. But technically he is one now. Once you commit that sort of tackle, you are that player, regardless of a previously faultless copybook.

Even then it remains necessary to take into account the sort of foul Cole was guilty of. Brainless? Yes. Needless? Yes. Reckless? Yes. But malicious? Pre-emptive? Definitely not. It certainly gave credence to Carlo Ancelotti’s opinion that Yossi Benayoun is a more intelligent player than Cole, but rather than being responsible for setting out to hurt Koscielny, a more obvious scenario was that he had been frustrated by his own anonymous performance and, seeking to impress his new supporters with old-fashioned hard graft, ended up losing the run of himself. Commendable intentions, cock-eyed execution.

The subject of bad tackles and injured players is a sensitive one for Arsenal, who have seen two players, Eduardo Da Silva and Aaron Ramsey, suffer horrendous, potentially career-ending broken legs in the past two years. On both occasions we were told that the players who fouled them, Birmingham’s Martin Taylor and Stoke’s Ryan Shawcross, were not that sort of player, lovely guys off the pitch. Yet while we can only judge footballers by their actions on the football pitch, perhaps it is the furious reaction from Arsenal that prompts this defence.

It is understandable that dreadful injuries to his players would infuriate Wenger, but his risible condemnation of Taylor, insisting (admittedly these comments were made immediately after the game and were later retracted) that the defender should be banned for life were entirely unhelpful. Look at the tackle again, and it is clear that Taylor was simply beaten for speed by a better and quicker player, and is not deserving of his pariah status. Taylor’s contrition afterwards indicated that there was no intent, and Wenger should have been big enough to forgive him. In a contact sport, accidents happen.

There is nothing wrong with a manager defending his club, of course, but this sort of attitude means people are unable to take Wenger seriously, accusing his side of being too soft when they visit physical sides up north. It’s a vicious circle which dictates that these sort of incidents are destined to keep on occurring, and as long as Wenger refuses to criticise bad tackles from some of his own players when they step out of line (William Gallas, Abou Diaby and Robin van Persie are no angels) his incensed remarks can too easily be labelled myopic and hypocritical.

This is not intended as a polemic against Arsenal or Wenger, merely to explore why it is that people feel compelled to stand by, essentially, leg-breakers. Certainly there are some who merely appreciate the rougher side of the game and grow tired with the praise of Arsenal’s brilliant football, but there are others who recognise the difference between malice and clumsiness. In incidents where a leg is left black and blue, the issue is not always black and white, which is what leads to us being assured that Joe Cole is a really top guy.

Ultimately when a referee has a decision to make, it should be as irrelevant to him whether the player meant to hurt his opponent as it is if he’s a really top bloke off the pitch or whether a red card will ruin the game as a spectacle. When Ben Thatcher knocked out Portsmouth’s Pedro Mendes with a sickening elbow when he was playing for Manchester City in 2006, Harry Redknapp, then the Portsmouth manager said, “Off the field, you could not meet a nicer boy. Unfortunately, on the pitch he is capable of doing things like that.” The first part of that quote is immaterial. This is football, not a popularity contest.

Jacob Steinberg is a freelance sports journalist for The Guardian and occasional blogger for mirrorfootball.co.uk. He supports West Ham