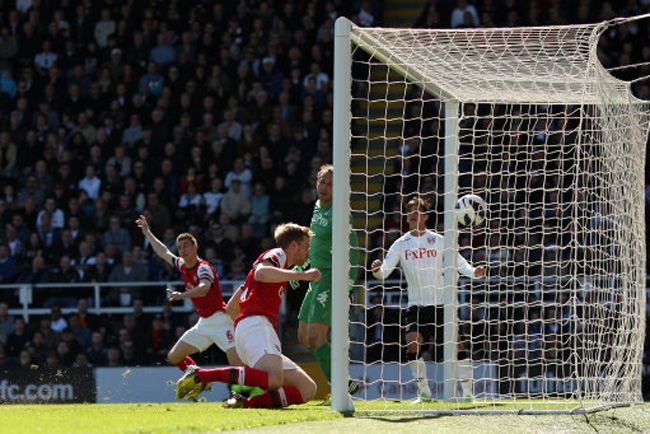 Arsenal moved back into third place after a less than convincing 1-0 win at Craven Cottage.

Former Gunners Steve Sidwell, just back from suspension, was shown red for a studs-up challenge on Mikel Areta after just 12 minutes. However, the visitors struggled to make their one man advantage count with the Cottagers going close themselves courtesy of Dimitar Berbatov and Alex Kacaniklic.

Olivier Giroud did hit the post for the Gunners before Per Mertesacker nodded home from close-range just before the break.

Arsenal again struggled after the break but managed to hold on for the vital win, even though Giroud saw red at the death for what arguably wasn’t even a foul, when his attempt to turn on the ball, caught Stanislav Manolev.

The north Londoners go third, two points ahead of Chelsea and five ahead of Spurs, although both those sides have played two games fewer.