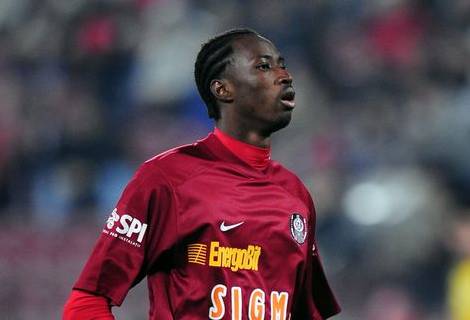 Not entirely sure whether to believe this or not but, according to ‘British and French sources cited by Tutto Mercato’, Fulham are within spitting distance of tying up an €8 million deal for highly-rated CFR Cluj target man Lacina Traore.

Many sides across Europe have been tracking 20-year-old Traore for some time, with Arsenal, Liverpool, Bayern Munich and Napoli all linked with a move for the 6’8” Ivorian – who, should you be wondering, has a goal-every-94.1 mins strike ratio in the Romanian league.

Such prowess has led to inevitable comparisons between the Cluj striker and fellow countryman Didier Drogba, though Anderlecht starlet Romelu Lukaku is far more deserving of those comparisons – with Traore resembling some kind of ungodly hash between Emmanuel Adebayor and Carlton Cole (which possibly explains why none of the ‘big boys’ have come calling aftercircling so closely for the last two years).

Don’t just take my word for it though, have a butcher’s and see what you think…