This made the news in Italy 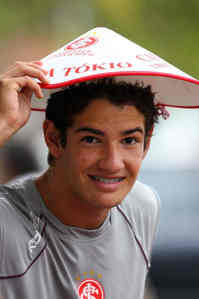 Milan’s Brazilian prodigy now has a Stephen Ireland-esque bonehead, thanks to the hairdressing skills of his girlfriend’s brother.
According to the clip below, Pato says he’d wanted to shave his head for a while, even though his girlfriend, the exotically named Sthephany (correct spelling), didn’t like the idea.
What, you’d rather read about swine flu? This is big news, people.
Video report on Pato’s chrome dome after the jump…