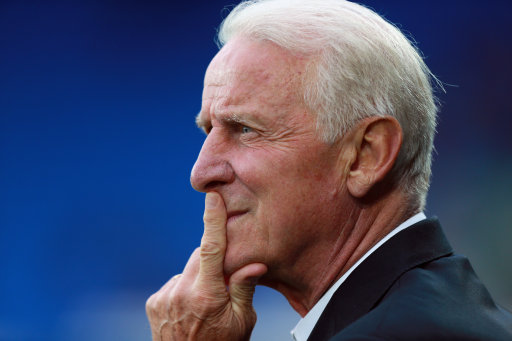 Not that it comes as much of a surprise given the rumblings and general dissonance that have been emanating from the Irish camp of late, but this morning the FAI have announced that Giovanni Trapattoni has left his role as manager of the Republic of Ireland manager.

No statement has yet been issued, but ITV Football are reporting that Trapattoni has agreed to resign following an “amicable meeting” with the FAI earlier today.

Well, that’s the end of the Trap era. No doubt he’s left Irish football in a healthier state than inherited back in 2008. The man’s done a fine (if overly cautious at times) job and we’re hard-pressed to think of an available successor who’d be able to take this Irish side any further though Leeds’ Brian McDermott is being mentioned in passing.

As for Trap, now aged a stately 74, you’d have to assume that retirement is in the pipeline. If so, then we’re waving off one of the finest coaches ever to have graced the game.