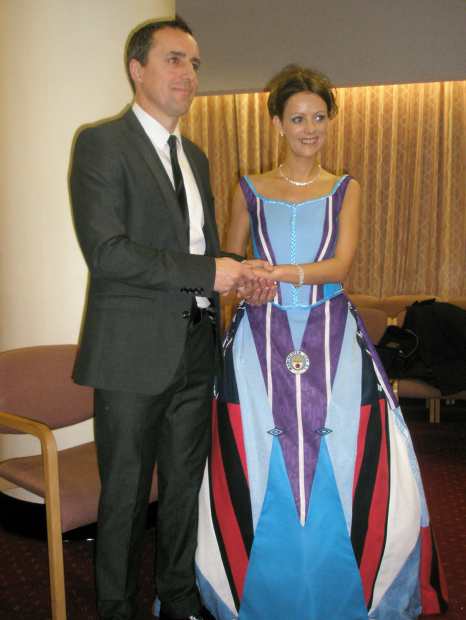 Man City fan Karen Bell, 38, decided to surprise her husband to be, and fellow Citizens’ supporter Simon, 49, by cutting up his collection of replicas Citizens jerseys. Yet this apparent display of wanton vandalism was actually an act of love, as she lovingly, and rather skillfully, fashioned the old jerseys into a fine blue wedding dress for Simon. (By the way, “Simon” doesn’t seem to have a second name according to the papers, so either they never got around to finding it out or “Simon” is following in the great single-monikered tradition of Brazilian footballers).

Anyway, after surprising the wedding guests with the football-tastic dress at the wedding ceremony, the two City lovebirds rushed to the Etihad to watch their team play the most glamorous of opponents, Stoke City.

“It was the day of a match so Simon said I would have to turn up in a City shirt, ” explained Karen. “That set me off thinking and I decided to do this. We wanted to do something different because we have both been married before.”

“It was a labour of love,” she continued “I was at the sewing machine six nights a week.”

Simon had given his blessing for his future wife to take his replica jerseys, which is good to be honest, as otherwise their marriage would have started on shaky ground.

“I was amazed when I saw her. The shirts were in a suitcase in the loft and I sacrificed them as a demonstration of my commitment, ” said loverman Simon. “We didn’t tell any of our friends and when we met them before the match in the Summerbee bar they couldn’t believe it.”

After the game, and a load of drinks at the Etihad, the couple jetted off to Edinburgh for their honeymoon. Who said football, I mean romance, was dead?