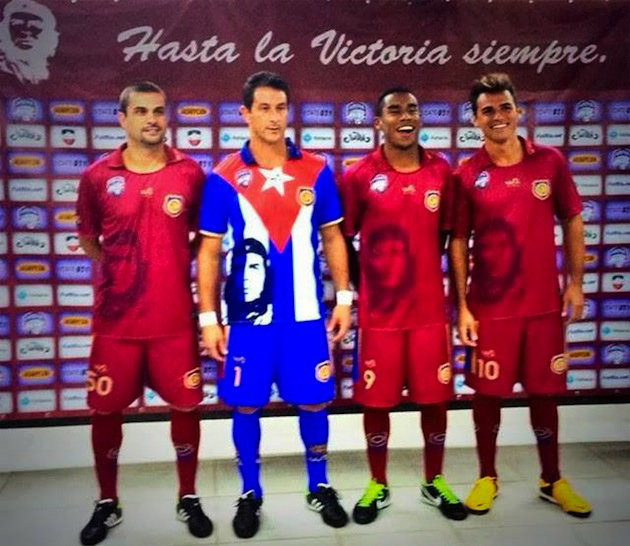 Brazilian third division side Madureira have enjoyed record shirt sales by simply slapping Che Guevara’s face on the front of their new kit, i.e, the very same tactic people have been using to flog cheap t-shirts, posters, stash tins and energy drinks to clueless student “rebels” for years and years.

The original plan was for Madureira’s seven-a-side team to wear the new ‘Che’ novelty strip (the ‘keeper kit also features a design based on the Cuban flag) for the 50th anniversary of the club’s historic tour of Cuba in 1963. Apparently Che met the players at their Havana hotel and even attended the last match of the five-game jaunt.

However, demand for the strip was so fervent that the club have now chosen to let their full side wear it too after sales rocketed from the usual rate of 10 shirts sold per month to more than 3,000 units being flogged since the ‘Che’ kit was launched.

Madureira’s president Elias Duba told Reuters: “The factory can’t keep up with demand. It’s taken on a whole life of its own. I wasn’t going to have the big team use them, but all the attention has convinced me otherwise.”