There was a time in the late 1980s/early ’90s when all the various factions of kit designers got together and forged a gentleman’s agreement that they, upon realising things were spiralling dangerously out of control, would all endeavour to strip football shirt design back to it’s bare minimum once again. Unfortunately someone spiked the Ribena.

Whilst I acknowledge that there were plenty of singularly ‘more offensive’ goalkeeper jerseys released into the wild during the 90’s (The red monstrosity that David Seaman for sported at Euro ’96 and Shaka Hislop‘s ‘Newcastle skyline’ effort spring instantly to mind’), Umbro really went to town in their bid to leave Nottingham Forest ‘keeper Mark Crossley with a permanent squint – and the fact that the ten men in front of him were often wearing this… 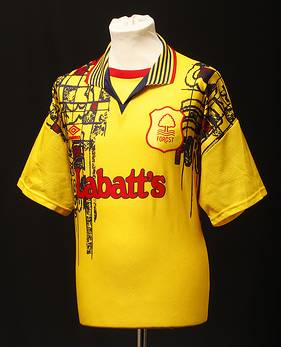 …well, it’s a wonder that the man can still go out in public.