Leicester City fans likely suffered palpitations this morning when they awoke to find Riyad Mahrez had apparently announced his sudden retirement from football via his official Facebook page.

Right beneath his blue tick, the Foxes star declared that he was “staying away from football” forevermore after being told to do so by his doctors. 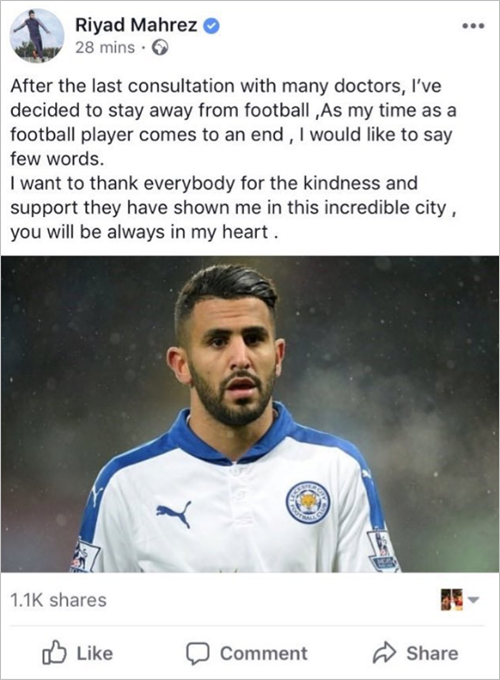 Thankfully, after the initial wave of shock dampened, several onlookers began to notice some discrepancies with Mahrez’s statement.

Firstly was the odd time of publishing (11:30pm); second was the disconcertingly vague wording and third was the fact that there’s no way Leicester would allow one of their biggest names to call quits on his career without mentioning it themselves.

Many began to suspect a hack, with the post duly being removed from Mahrez’s Facebook page later that afternoon.

Still, many were left to compliment the attention to detail observed by the hacker(s), who even appeared to mimic Mahrez’s slap-dash approach to punctuation…

Remarkable attention to detail from whoever hacked Riyad Mahrez’s Facebook account. Check out the unusual use of commas. pic.twitter.com/q03la4o3JC

While the message has been deleted, not a single word of explanation has been emitted by either Mahrez or Leicester City.

As things stand, Pies think our best bet is probably to wait and see if he turns up at The Hawthorns on Saturday afternoon.

So that’s that then. pic.twitter.com/kfpRXOToPq

Call off the search (and the retirement).