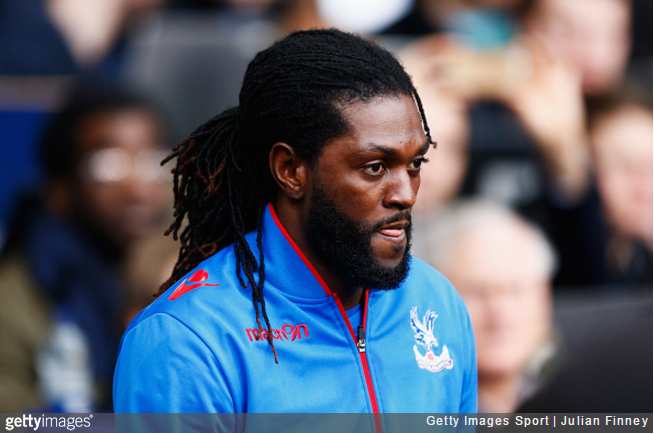 Emmanuel Adebayor has denied claims that he acted like a bit of a berk while meeting with representatives from Lyon over a potential move.

Adebayor met with Lyon manager Bruno Genesio last week to discuss a move to Ligue 1 but the negotiations fell through at an early stage because the club were not prepared to release the striker for the upcoming Africa Cup of Nations in January.

However, as per the Guardian, it was also reported in some quarters that Genesio backed out of talks due to a peculiar series of requests made by Adebayor during the chat, including a private helicopter to ferry him to and from training, hiring celebrity chef Joel Robuchon as his personal caterer and a swimming pool with a view of Corsica (which is in the middle of the Med, some 450 miles away).

The stories seem to emanate from a batch of ‘quotes’ taken from spoof site Football France, in which Genesio also apparently said:

We had a place in our squad for Manu, so I arranged to meet him for a coffee in Lyon.

But, to my surprise, when he arrived he asked for a shot of whisky in his coffee. He also had a cigarette hanging out of his mouth.

Despite clearly being a hoax, it didn’t stop several British news outlets from running with spoof quotes, which compelled the actual Adebayor to release a statement denying them.

Usually I do not comment on any transfer negotiations or speculation but this time certain matters need to be cleared up.

Lyon wanted to sign me and offered to pay for a private jet from Togo to bring me to Lyon in order for me to sign ahead of their game against Marseille.

The contract was all agreed and I was merely flying in to complete a medical and sign the paperwork.

Unfortunately I could not get there in time to be registered for their game and they signed another young striker instead. They still asked if I could come and speak to the manager and director of football in order to establish if it would be possible to sign us both.

We all had a perfectly amicable meeting in Lyon but the coach felt it was not fair on the young player’s development to sign us both and I felt I would not get the requisite game time I needed to make this opportunity worthwhile.

For the avoidance of doubt, I only drank water at this meeting and did not ask for whisky or have a cigarette.