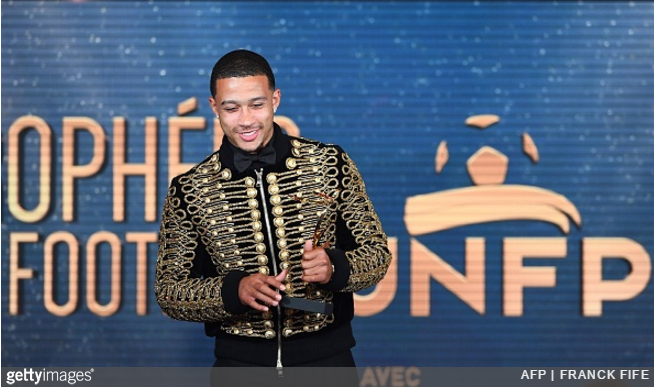 Indeed, the Lyon winger opted for a demure gold-studded matador’s jacket for the occasion, as coupled with a little black dickie bow…

The Player of the Year award went to Edinson Cavani, who saw off Alexandre Lacazette, Bernardo Silva and PSG teammate Marco Verratti in the running to snaffle the top prize…

Elsewhere, Leonardo Jardim was crowned Coach of the Year with his Monaco side looking set to win the Ligue 1 title, with Danijel Subasic winning the Goalkeeper of the Year award for good measure.

It should come as little surprise that Kylian Mbappe took the Young Player of the Year award, while Depay won Goal of the Season for his humongous 60-yard lob against Toulouse in March.

N’Golo Kante was also bestowed with yet another trinket, picking up the ‘Best French Player Abroad’ trophy ahead of Karim Bezema, Ousmane Dembele and Antoine Griezmann.

And, last but not least, there was an Englishman who also ended the evening with an award too, with former Crystal Palace and Tottenham midfielder John Bostock taking the gong for Ligue 2 Player of the Year following a fine old, promotion-chasing campaign with Lens.