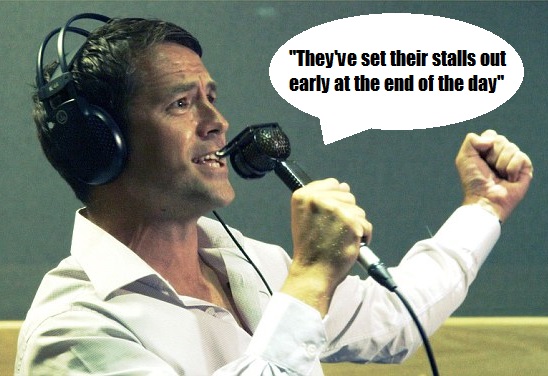 The collective sigh of a nation was palpable when BT Sports announced that Michael Owen was joining their team in co-commentator capacity at the beginning of the season, as subscribers suddenly realised that they were in for at least a season’s worth of beige footballing clichés and banal, perfunctory observations from a man who more or less talks in binary code.

Lo and behold, L’il Mike didn’t let anybody down, causing many a BT Sport viewer to suffer catatonic nervous meltdowns with his colourless delivery and 2D insight.

We though we’d assemble a few of Owen’s finest utterings in one place so, generations from now, the human race is aware of what we as a populace had to endure…

1. “What a feeling it is to be a manager and bring someone on.”

3. “It’s a nightmare for strikers when defences push up. You’ve got to go with them or you’re offside.”

4. “Wenger will be quite happy that Arsenal haven’t conceded”. Yep, probably.

5. With Liverpool launching a counter-attack against Arsenal: “They’re outswarming them!”.

6. “Pellegrini will speak to them and City will come out with a fresh set of impetus.”

10. After Chelsea scored their sixth goal against Arsenal: “This is turning into a rout.”

11. “That would’ve been a goal had it gone inside the post.”

12. “You need people who score goals. That’s how you win games”.

As a great man once said…

Michael Owen, with your voice like somebody else’s holiday photos.