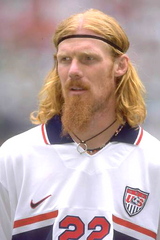 2 They take free-kicks like this.
3 Danny Dichio gets a game. Not only that, he’s scored four goals in six starts for Toronto. Prior to that he scored five goals in 63 appearances for Preston North End. Dichio would NOT get a start in any top-flight team in England, Italy or Spain.
4 The standard of defending is truly dreadful. I’d put it on a par with Conference football in England. Witness some of the defending in this selection of MLS goals.
5 Oh, it’s just not is it. Come on Alexei, you’re having a laugh. If the best team in MLS were to play in the Premiership they’d be relegated, without a doubt.