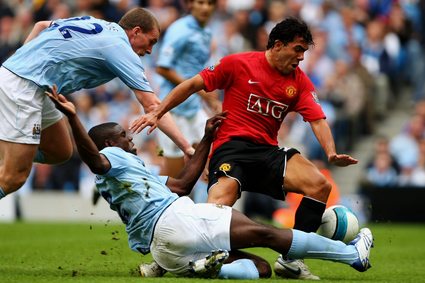 1 Micah Richards is a superhuman backtracking machine who will hunt you down and tackle you (and he’ll get himself in all sorts of terrible positions first just to give you a bit of a chance!).
2 If Sven keeps this up he might be able to miss ‘the England years’ out of his autobiography altogether. Manchester City top of the table. Who would have thought?
3 Rob Styles was having a ‘mare. He gave a soft penalty after Florent ‘Salmon’ Malouda leaped into Steve Finnan, and then started flashing yellow cards around regardless of whether the player had committed an offence, had been booked before or whether he actually intended to book them.

4 Bolton + Sammy Lee = Big Trouble. I smell Steve Wigley Syndrome.
5 Goal-line technology needs to be brought in – just ask David Healy and the gang at Northern Ireland FC, sorry Fulham. A dodgy decision cost them a point against Middlesbrough.
6 Derby losing 4-0, Sunderland losing 3-0. It’s about time these newcomers learnt their place! It gives some sense of normality.
7 Harry Redknapp seems to have unearthed another gem in John Utaka. Showed his pace and scored a classy goal against Bolton. I would draft him into my fantasy team if he was registered as a midfielder (where he is currently playing).
8 Manchester United’s title challenge will be over before it has started if they drop any more points in the next couple of weeks. We all know they are traditionally strong finishers, but they are giving everyone a worryingly big headstart.
9 Call it stating the obvious but Manchester United desperately need a tap-in merchant, a fox-in-the box. Emergency call to Andrew Cole?
10 In theory, Wigan could have had about five penalties and made their victory over Sunderland really emphatic. As it was referee Mike Riley only gave two (apparently first half penalties have been outlawed).
11 Arsene Wenger is naive if he thinks calling Blackburn ‘violent’ after their 1-1 draw will stop them doing exactly the same again. He needs to invest in a couple of players with some grit to help the Gunners’ flair players cope in this sort of match. At least he can sleep easy knowing Bolton will roll over this season!
(Photo by Alex Livesey/Getty Images)