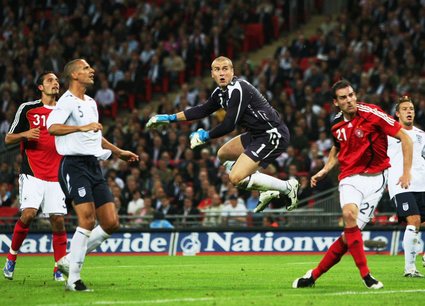 1 England started in promising fashion, but it all ended in the same old flat performance and poor result.
2 This must surely be the first time that 80,000 England fans have spent half-time praying for David James to come on for the second half!
3 This leads us to the culprit: Paul Robinson. Ian Wright made a valid point (which is a first) about England goalkeepers being played simply because they are ‘number one’ rather than being dropped when their form dips. Robbo’s form certainly seems to have dipped.

4 Micah Richards is exactly what England need more of: direct, fast, enthusiastic and unfazed by anything.
5 Alexei Lalas will be mad. I am not sure watching David Beckham half-hobbling around on his dodgy ankle for 90 minutes was what he hoped to see.
6 John Motson and Mark Lawrenson should appreciate that we expect them to be commentators, not clairvoyanants. Gentlemen, when you mystically foresee a substitution we know that you have seen someone taking their tracksuit off!
7 Remember Joe Cole, the 15-year-old West Ham trainee who was going to be England’s best player? Well, he might just have done it on the quiet. Over the past year he has been England’s most consistent performer and he was their best player again last night.
8 Christian Pander can strike a ball. For Robinson’s mistakes, there was nothing he could do about the Schalke left-back’s goal.
9 When the new Wembley’s loud it is very loud, but when it’s quiet you can hear a pin drop!
10 Nicky Shorey really impressed me for Reading last season, but I’m not convinced we should be relying on him too much for England. He certainly hasn’t shown himself to be international class yet.
11 Although England fizzled out, they did deserve to score at least another goal.