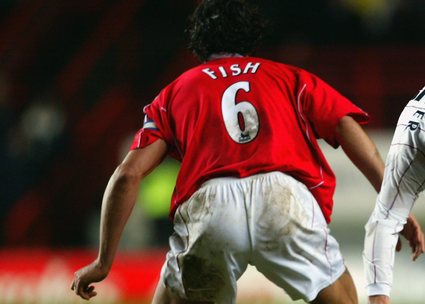 Peter Fox
May sides claim to have a cat between the sticks, but we’ve got a Fox.
Mark Fish
The ex-Bolton and Charlton defender will reel in any attackers.
Peter Haddock
The former Leeds man completes our fishy centre-back pairing.

Wolfgang Wolf
A former player who famously went on to manage Wolfsburg. That’s a lot of wolves.
Christian Pander
German international and Schalke left-back with a hint of China.
Arjen Robben
This ex-Blue will now be wearing white in Madrid, but the name says red-breast.
Chris Eagles
The Manchester United player who never fails to soar or be swooped upon whether he is playing well or a transfer target!
Richie Partridge
Who better to play on the wing than a Partridge?
Steve Bull
The ex-Wolves and England was bullish by name and bullish by nature.
Shaun Goater
Feed the Goat and he will score, or so went the chant.
Lee Peacock
Strutting his stuff up front is Swindon striker Peacock.