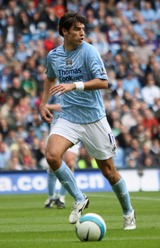 With the international break in full effect, I thought now would be a good time to look back at the Prem season so far â€“ we are almost a quarter of the way through, after all â€“ and choose a team based on the players who have been at the top of their game.
This is what I came up withâ€¦
GK Jose Reina (Liverpool) Still only 25, the big Spaniard has graduated to become the Prem’s most solid ‘keeper. Brilliant at shot-stopping and penalties in particular, he has also cut out the silly mistakes that characterised his first two seasons at Anfield.
Honourable mention Rob Green of West Ham has made a fine start to the season. His tactical play could be better, but his reflexes are better than those of any English goalie.
RB Vedran Corluka (Man City) You wouldn’t know it was his first season in the Premier League, which says it all. Corluka (pictured) actually cost more (around Â£8m) than any other Sven signing, which shows how highly he’s regarded by the astute Swede. The 21-year-old Croatian is tall, composed and intelligent; and he can only get better.
Honourable mention Liverpool’s Alvaro Arbeloa is usually a right-back. But even though he’s started most games at left-back this season, I’ll stick him in here for an honourable mention. Arbeloa, who is obviously rated by Rafa Benitez (Rafa coached him in Real Madrid’s youth team), is Mr Consistent, and, like Corluka, something of an usung hero.

CB Rio Ferdinand (Man Utd) Much of the credit for Man Utd’s new-found meanness at the back must go to Rio, who is now in his prime. When he’s on his game, I don’t think there’s a better centre-half in the world. He makes the game look so easyâ€¦
Honourable mention â€¦and much of the credit for Rio’s fine form has to go to Nemanja Vidic, who is the artisan to Ferdinand’s artist. Vidic, who does the dirty work with admirable relish, is the perfect foil for Rio.
CB Micah Richards (Man City) The most improved player in the top flight is now one of the first names on the City (and England) team sheet, and rightly so. Physically he’s a monster â€“ someone as strong as Richards has no right to be that quick, or as composed on the ball. Not sure if right-back or centre-half is his best position â€“ he’s brilliant at both.
Honourable mention Martin Laursen has been Aston Villa’s most reliable player so far this season, showing the impressive form that prompted AC Milan to sign him in 2001.
LB Patrice Evra (Man Utd) Man Yoo fans wish they could clone Evra and put him at right back too. The Frenchman is really developing into a world-class full-back, so much so that no one at Old Trafford misses Gaby Heinze that much.
Honourable mention Gael Clichy. Just as Man U fans don’t miss Heinze, so Gooners don’t miss Ashley Cole one bit, and that’s down to the form of Clichy, who has been one of Arsenal’s best performers this season.

MF Cesc Fabregas (Arsenal) Along with Lionel Messi, Cesc is now the most coveted young player on the planet. Plays with an intelligence beyond his years, and has added goals to his repertoire. I still feel that Roy Keane wouldn’t let him get away with as much in the middle of the park, but there aren’t any midfield enforcers left in the Prem, which is good news for creators like Fabregas.
Honourable mention Michael Johnson can’t claim to be in the same class as Cesc, yet, but he is young, talented and English, so let’s support him as much as possible. Under Sven, Johnson has flourished.
MF Mathieu Flamini (Arsenal) I hardly recognise the ’07 Flamini from previous versions. Seems to have been around for a while, but is still only 22. Has found new confidence and so far he’s formed a formidable central midfield partnership with Senor Fabregas.
Honourable mention Perversely, I’d like to nominate Frank Lampard, who by his absence through injury has proved his immense worth to Chelsea. They are half the team without him.
MF Martin Petrov (Man City) Bulgaria’s Dimitar Berbatov tried to persuade Spurs to sign compatriot Petrov, but Sven wanted him more, and you can see why. Petrov has been fantastic on the wing for City.
Honourable mention Clint Dempsey has been the one bright spark for a Fulham side that is clearly low on confidence. The American has weighed in with a few goals in his new, advanced role, and I wouldn’t be surprised if a bigger club than Fulham doesn’t make a move for him in January.
MF Elano Blumer (Man City) His classy performances, punctuated by wonder goals and dazzling free kicks, have left Man City fans with drool on their replica shirts. They are already mentioning him in the same breath as City cult heroes like Georgi Kinkladze and Colin Bell.
Honourable mention Mikel Arteta. Still Everton’s most valuable player, by some distance. How long will he stay at Goodison though?
FW Emmanuel Adebayor (Arsenal) Thierry who?
Honourable mention Robin van Persie. See above. The form of Adebayor and RvP has managed to fill the large, TH-shaped gap, and then some.
FW Mwaruwari Benjani (Portsmouth) Not pretty to watch but a handful for any defender and has found his scoring boots this season.
Honourable mention For Robbie Keane of Spurs and Nicolas Anelka of Bolton, who have both been playing really well in underperforming teams.
Manager Svenâ€¦ who else?
Happy with my selections or did I get it wrong?