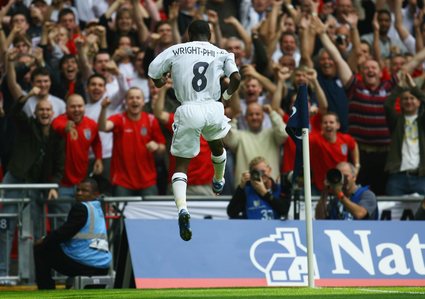 1 Saturday’s result was a decent result against poor opposition. A better second half performance would have been good, but the victory was secured.
2 Steve McClaren’s 3-0 specialists seem to have kept their boss’s job safe for a little while longer.
3 Having said that, if they manage to mess up qualification from here, don’t expect him to be in the job much longer.

4 Pies readers know best. A whopping 91 per cent of you voted for man-of-the-match Gareth Barry to keep his place in midfield ahead of Frank Lampard.
5 Having said that, the booing that accompanied Lampard’s arrival was childish and unnecessary. Pies has poked its fair share of fun at Fat Frank and given our views on England’s midfield selection issues, but once Lampard is named in Steve McClaren’s squad and brought on as a substitute there is nothing to be gained by booing except bringing down the team’s performance. Ask Peter Crouch if the booing continues when you score a couple of goals…
6 Taavi Rahn’s long-range header was up there with some of the best Wembley own goals.

7 Ashley Cole’s injury really took the sting out of the game. The England players seem to get a bit shaken up about how easily Wednesday night’s trip to Russia could be taken away from them.
8 Wayne Rooney does remember how to score international goals.
9 But England fans had better hope that someone capable of linking up with him effectively has emerged by the time Little Mickey Owen retires. England lose all shape and attacking penetration without Owen to stretch the play and push defenders towards their own box.
10 Shaun Wright Phillips seems to have sensed the time was right to nullify any Beckham revival and has done so over the last few games. Becks and Aaron Lennon will both have their work cut out dislodging him.
11 And, as commented by attacking guru Alan Hansen, SWP has formed a really impressive offensive partnership with Micah Richards. The Manchester City full-back is so good going forward and so quick at getting back that you can’t see a way back for Gary Neville at the moment.