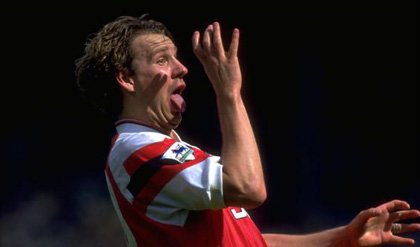 We think it was the late great Bobby Moore who said, â€œLose and weâ€™re on the booze, score and we want some moreâ€.
Footballâ€™s booze culture isnâ€™t as prevalent as it used to be, what with new foreign disciplines, intense media scrutiny and a more athletic standard of play that means most of them just couldnâ€™t get away with it like they used to.
But, there have still been more than a few players who have fallen foul to the demon drink along the way â€“ click through for a look at our first XI of footballâ€™s worst drinkers.

George Best
â€œI spent a lot of money on booze, birds and fast cars â€“ the rest I just squanderedâ€. Thatâ€™s how Bestie rolled â€“ he was once caught in a bed strewn with cash with a bottle of champagne in one hand and Miss World in the other â€“ â€œWhere did it all go wrong George?â€
Paul Gascoigne
Gazzaâ€™s drunken antics have been splashed over the tabloids since he was old enough to get served â€“ they include the infamous dentists chair incident, munching kebabs, numerous fights and conning his mate Jimmy Five Bellies into eating cat shit cunningly disguised as a mince pie!
Paul McGrath
Head of the old Manchester United drinkers school with Norman Whiteside and Bryan Robson who would down pints all day and then turn up for training slightly sozzled…until Fergie arrived.
Tony Adams
Footballâ€™s most famous reformed drinker swapped nights out crashing his car into peopleâ€™s front gardens and waking up in a pool of his own piss for newfound sobriety. Heâ€™s now set up the Sporting Chance clinic to help other footballers deal with their addictions and even managed to pull Caprice along the way.
Gary Charles
Probably best remembered for his innocent part in the tackle that did Gazzaâ€™s knee in the 1991 FA Cup Final. Itâ€™s been a downward spiral since and Charles was jailed for dangerous driving after being found slumped in a mess over his steering wheel next to a bottle, although heâ€™s apparently on the mend now.
Jimmy Greaves
Saintâ€™s other half, Jimmy Greaves, battled a well-documented alcohol problem in the 70s (possibly trying to drown the sorrows of missing out on World Cup glory) but finally quit in 1978 â€“ which probably saved his life.
Jermaine Pennant
Liverpoolâ€™s self styled bad boy was the first professional player to be fitted with an ankle tag after being arrested for drunkenly driving his Mercedes while it was still attached to a lamppost and then claiming to be Ashley Cole at the police station.
Jody Morris
Jody Morris is straight from the Dennis Wise school of â€˜nasty little *****â€™ with drunken scrapes including abusing Americans after the 9/11 attacks, driving the wrong way down a one way street and more fights than we care to remember â€“ not big or clever.
Paul Merson
Another player cast in the mould of troubled genius, Merse used to celebrate his inspirational goals with a pint downing celebration before blowing his wages (and his nose) at the bookies â€“ but it all ended in a tearful admission of his numerous addictions
Malcolm MacDonald
Turned to the bottle to ease the pain of a knee injury and the boredom that overwhelms players once their careers are over. He was arrested for being three times over the drink-driving limit despite not touching a drop since the previous day â€“ heâ€™s now sober after an operation to fix the guilty knee.
Diego Maradona
Drinking was one of Diegoâ€™s many vices, which also include eating, smoking and snorting â€“ but it would be rude not to include him in any list of footballers who have problems with excess
Let us know if there’s any alcoholic footballers we’ve left anonymous